If you've received the new version of the Android Market on your phone, you might have noticed among the legion of additions to the app a very noticeable subtraction: the "Just In" section. Some people don't like this.

In fact, there is a growing thread over at Google Support with a number of complaints about this change. Of course, the complaints are pretty exclusively from developers. Now, some of these complaints are made from a legitimate perspective - new developers who want exposure. Of course, the problem is that these developers can't actually determine what percentage of their app's "clicks" come from the "Just In" section - there seems to be a tacit assumption that it's a large number, without any evidence to back up this claim. I don't think that is at all the case, but I don't have any numbers, either - just my own personal experience that I think many of you will be able to corroborate.

If you have (or had) ever been to the "Just In" section, you know it's sort like taking a trip to a designer knockoff market in Shanghai - almost nothing is what it claims to be, and a lot of is just plain crap. In fact, check out AppBrain's new app section for a taste of pure, unadulterated spammy goodness.

Those who argue that they need the exposure from the "Just In" section probably weren't getting any in the first place. They're drowned in a sea of mass-produced clone apps and unauthorized branded themes and live wallpapers, or various re-skins of stupid poke-the-animal "games." Let me give you an example of what it is I mean.

Erines (as their current Market developer account is named) is a "developer" of poke-the-animal touch "games." Here's a picture of one page of their apps currently on the Market: 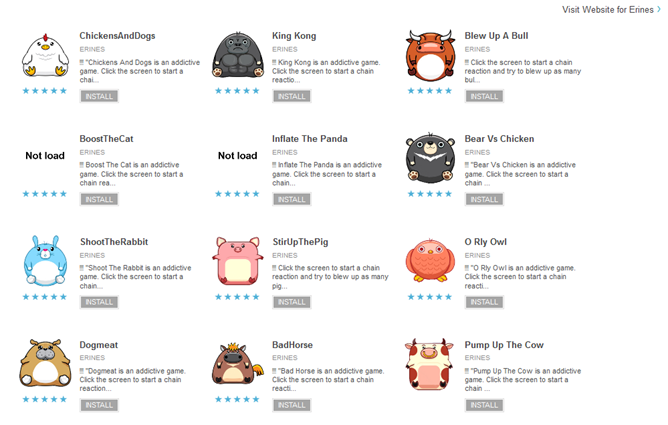 We have announcements regarding their apps, in various spellings and spacing arrangements, banished from our RSS feeds. Why? Well, for starters, take a look at the naming on two of their applications, which are in fact the same application:

You'll notice one has spaces, one doesn't. The 'pname' is changed (2c vs 3a) to make it look like a new app. Developers like Erines rely on a simple and formulaic approach to maintaining exposure on the Market. It goes something like this:

If you try their apps (I don't really suggest you do), you'll find that Erines (or whatever company they represent) isn't even trying. These aren't apps - they're glorified shortcuts to ads. Here's the list of such apps we've banned from our feeds:

Sorry for the uber-long image, but I'm trying to make a point. We estimate, based on the number of Market accounts Erines (or whatever they're called) has created, and the number of apps they've published, that there have been literally thousands of spam apps put out by one company alone. Now, imagine how many unauthorized branded and softcore porn live wallpapers get published to the Market every day. Think about how many crappy "themes" of the same kind go up. Pontificate on the huge number of glorified display ad "games" being uploaded every 24 hours. App spam is a problem, and it's a big one.

So, Google has nuked the #1 incentive for the publishers of these spam apps: exposure. Removing the "Just In" section means that the vast majority of these spam apps will go sight unseen forever. Because no one will be looking for them in the first place. This means that a lot of app spammers will probably give up, and move on to gaming the Market's search like respectable shady people (just see the second page of results for the search "Angry Birds").

But What About The Little Guys?

You'll get no argument from me - this change was a double-edged sword. But I think the help far outweighs the harm. Users will no longer have easy access to a litany of fake and unauthorized applications attempting to take their money or waste their time, because app spammers have lost almost all incentive to continue bombarding the Market with their useless crap. That's not to say this solves the "crap app" problem, but it sure does a lot more to get there than anything Google's done previously (read: nothing).

Some developers of themes and live wallpapers (legit ones) do claim to rely on this section of the Market, but it's not like they're without other avenues for exposure. In fact, we post our favorite new live wallpapers every two weeks. They're almost exclusively by small, independent developers. I find little merit in the argument that the "little guy" is getting excluded from opportunities for public exposure just because the "Just In" section is gone, when clearly half the average Android blog's job is looking for new and exciting applications. I don't believe for a second that the cottage industry of independent Android developers has been irreparably damaged by this change, and I doubt we'll see a shortage of cool indie apps any time soon.

And I can't speak for other such blogs, but I know for a fact we at Android Police love hearing from small, independent developers with exciting new apps - in fact, it's the emails of corporations and paid PR agencies we find ourselves putting in the trash most often, because "canned" apps are about as exciting as canned cheese. We read every e-mail we get from actual developers and tipsters, and if you've got a new app, we're at the very least willing to check out the Market page for it. Heck, if you include an apk in the e-mail, we'll probably even give it a try.

That's not to say we, or any blog, will guarantee coverage just because you tried. There's a lot of apps out there that, frankly, don't meet the bar. And if you want useful feedback on your app, there's plenty of places to go. XDA. Reddit's /r/android. The Android Developer Forums. All of them are full of individuals willing to give you honest critiques and advice (and without character limits!).

The "Just In" section was a crutch, and an unnecessary one. One that was hugely exploited by shady organizations and spammers, and one that I'm glad is gone.