Zorro is a fictional character with a long and storied history. I mean, the character was created in 1919, spawned countless adaptations and inspired Batman, for god's sake: the man in black is frequently associated with the fierce swordplay and the volatile colonial era of Spanish California.

Zorro: Shadow of Vengeance is a side-scrolling adventure in which you play as an anime-styled version of the classic Mexican hero, Zorro. Zorro's design is one part Japan and one part Assassin's Creed; Antonia Banderas he's not. Using an array of touch controls, you'll jump, whip, sword-fight and roll through a number of levels as you look to bring a corrupt army captain to justice.

And well, this is all fine and good. It's a refreshing take on the platformer genre with a whole lot of ambition. The game takes some risks with, well, everything, and manages to put together a solid-looking game.

The games controls are not handled by on-screen buttons, but by swiping gestures: swiping horizontally will move Zorro, while swiping diagonally up will make him jump. Tapping outside of certain boundaries will make him swing his sword, and other gadgets like his whip happen automatically when the situation presents itself.

However, these controls can be a little confusing sometimes because of flaws in the game's design. This isn't to say that they don't work -- you just have to work out some quirks, first.

The game would be vastly improved if there was some sort of confirmation about what you were doing. I'm not saying that there needs to be a "CONGRATULATIONS, YOU JUMPED!" message splayed across the screen every time you swipes, but an outline of your swipe (or an approximation) would at least tell you what was working.

This, coupled with some level design problems, leave to a very large sense of uncertainty when you're playing the game. For instance, whip-able objects that are used to cross chasms are hardly evident, leaving you to make frequent leaps of faiths in the interests of progressing in the level. It's frustrating, because I don't want to have to trust the game to let me continue or not: I would rather be able to say "okay, here's my next objective. Let's go get it."

This design problem could easily be fixed with an in-game mini-map; replacing the gigantic pause button would help greatly.

Other issues include ledges which mesh into the background of the levels, leaving it unclear whether you're actually able to grab onto them or not. Adding pick-ups which don't seem to have any effect (besides score) just adds another layer of "Wait, am I supposed to be trying to get that? Or is it optional? Is it a hint to where the level is trying to take me?"

This ultimately slows the game down to the point of boredom; enemies that die in one hit and bosses that can be trapped in a corner and slashed to death don't help matters much, either. 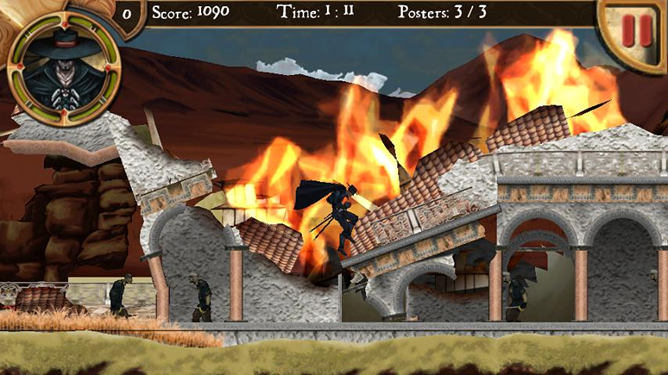 I can't help but want to pat the developer on the back and say "good try, champ, you'll get them next time." While they had a bit of a hard time actually producing a fun game, they decided to take some liberties with the subject matter and gave us something that wasn't entirely crap.

I feel that this is different from a game that fails to deliver on controls, playability or graphics: Zorro: Shadow of Vengeance failed because it didn't have a good grasp on the way games should be designed for audiences who have never played it before. While it was a good concept, it just doesn't have that "it" factor that makes me want to keep playing it.

The game is a modest $2.95 CAD to buy, and for a very pretty game, that's not horrible in the least. I would recommend it if the Android return window was still 24 hours; by that time, you would be able to tell if it's worth your time or not.

For now, though, I can't really recommend it.

Rugged Motorola Defy+ Is Now A Reality - Coming To Asia, Europe, And Latin America This Fall