The price of the Acer Iconia A500 has been steadily declining over the past few months and it looks like Target is offering their best deal yet for this Android 3.0 tablet. Starting from August 14th you can pick up the Iconia A500 for $399 and get a $100 Target Gift Card free, effectively making the price $299.

Update: Best Buy has a similar deal going, it seems. Rumor is, so does Walmar. 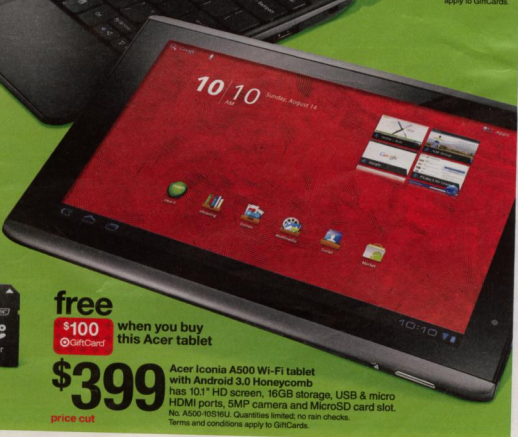 The Iconia A500 features the following standard Honeycomb specs:

With the so called Acer Iconia Tab A501 available for pre-order and due to be launched shortly, it is likely that the price of the A500 will continue to decline. Nevertheless, this is probably one of the best deals for a fully featured Honeycomb tablet.

Revolutionary 0.4 Released, Adds Support For More Devices - Including The HTC EVO 4G And ...