As I'm not one to enjoy doing large amount of typing on my mobile phone, I have a number of applications that make the job easier. These apps are usually employed to make quick, short notes that I can index and access later, therefore saving me a lot of trouble.

Coming to us from Singaporean developer 2nd Class Citizen, that's exactly what Chop Chop looks to do, only with some unique features the differentiate it from the rest.

Chop Chop gives you four categories of input from which you can make your note: numbers, words, checklists and pairs. Each is sorted into a separate tab, which in turn lists everything that you've created.

Numbers and words are simple enough: you just type what you want to remember into the field, and save it. Checklists and pairs, however, give you some deeper preferences on how you want that data stored. Checklists are straightforward enough, and let you keep track of multiple lists instead of just displaying one central entry. Pairs let you mix and match words to words, or numbers to words.

I can't really think of a use for pairs aside from grocery lists or recipes; being able to say that you need X amount of Y definitely feels useful. However, without an ability to eliminate from that shopping list (like the checklist), pairs seems to be very limited. 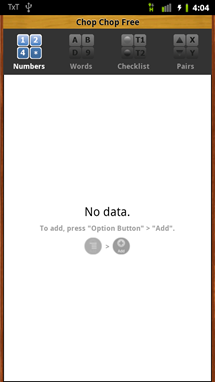 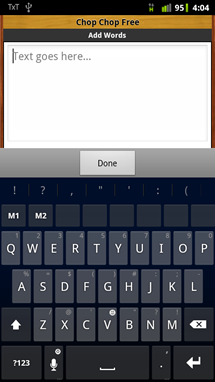 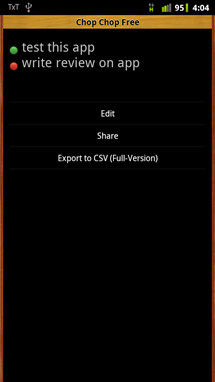 Checklists kind of rubbed me the wrong way at first, as well. Unlike traditional to do lists, you have to edit the list in order to check things off; this takes five clicks (Checklists tab, the list you want to edit, menu button, edit, checkbox) when it could take as little as one or two. This isn't exactly the most intuitive thing in the world.

However, the app's greatest strength (and what sets it apart) is the ability to automatically make entries from text that is added to your clipboard. This can definitely speed things up, as it eliminates actually having to open Chop Chop in order to create an entry. Also, I can't tell you how many times I didn't think to save anything when I actually needed it later: this type of "Save EVERYTHING, whether you need it or not!" functionality could save those with bad memories, like me.

Chop Chop also recognizes things like GPS coordinates and phone numbers when you input them, so you can pull up your phone's dialer or Google Maps right from the app. While this isn't exactly shocking as far as features go, it's a good implementation of the Android API. I mean, instead of having to copy a phone number again once you've copied it already to put it in your notes, it eliminates some steps and provides some utility.

The app also allows you to backup and restore your notes to your SD card, and the pro version allows you to export lists to .CSV files and text entries to .TXT. Again, this feature isn't flashy, but allows you to take your notes where you need them to go without having to worry about format. 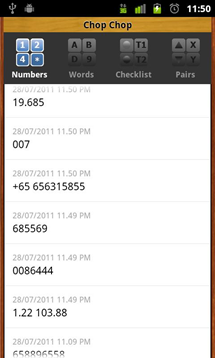 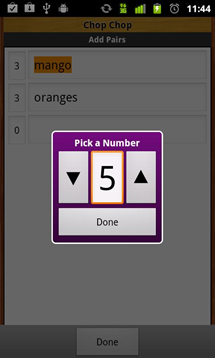 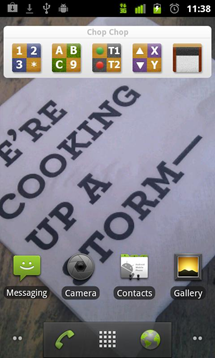 There are some parts of this app, however, that could use improvement. The checklist tab just seems badly organized, as I didn't expect to see a list of my lists when I first brought it up. To do lists are meant to be quickly accessed, and sometimes there's just too much involved to bring it up and edit it.

Also, visually, this app is rather boring. While it doesn't exactly need to be, other apps like Evernote beat it handily in this department.

The app costs $1.99, and will give you access to the Text Recognition and Clipboard features, a desktop widget that allows for quick entry, and the ability to launch apps based on phone numbers and locations. The free version is limited, but delivers the core functions well.

However, without some kind of cloud sync option, I can't really recommend this app. There are other programs that use Dropbox and Evernote much more efficiently, and that's how I want my note-taking to be accessed: smoothly through multiple platforms. I have to give 2nd Class Citizen some props for interesting features, but there are better apps that do note taking better, and for free.