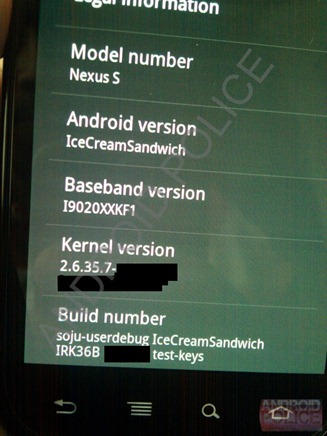 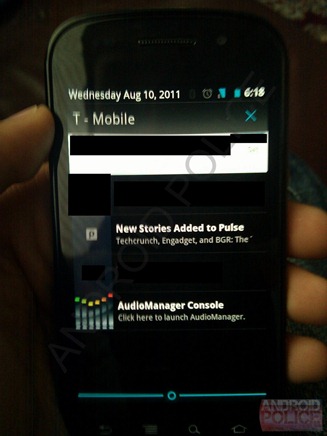 What can we learn from these? Well, the big stuff is obviously all the UI changes - namely, blue: everywhere. But you can see that the notification bar has been totally revamped for the first time since Éclair.

And in the About menu, we can finally say months of "rumors" about what version of Android Ice Cream Sandwich will be have all either been clever trolls or totally unfounded speculation - because Google themselves have yet to decide what version number it is. Anyone from here on claiming to have information about a version number better be willing to furnish some screenshots, because ours clearly lacks such a number. And yes, it's very recent. We do know the build number is IRK36B.

What else can we tell you about Ice Cream Sandwich? Our source has revealed the following:

We know this isn't a lot, but hey, it's something, and it's the first time anyone's publicly released any images of Ice Cream Sandwich - which Google has kept a very closely guarded secret since its existence was formally announced. So we'll take what we can get. Also, to the skeptics: both we and RootzWiki have the utmost confidence in our source on this one, we'd call it a "rumor" if we didn't, there's no build.prop editing going on here.