The Droid Charge was the first 4G phone with Droid branding to hit VZW, and as such, has been the flagship phone of the Droid lineup since its release back in May. If you were to walk into a Big Red retail store and buy the Charge right now, you would leaving with $300 less than you went in with, and, lets face it, who wants to drop that much coin on a new phone?

Thankfully we have online retailers like Amazon Wireless to prevent us from wasting a ton of money, and they're here to save you a cool $230 on a new Droid Charge -- as long as you're a new Verizon customer willing to sign on the dotted line vowing your loyalty for the next two years. If you've already sold your soul to Big Red, no worries, as you can still grab this handset for $120 with applicable contract renewal, which is still substantially cheaper than retail. 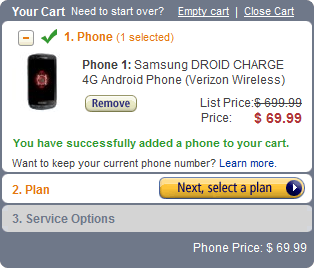 So, if you're ready for some 4G LTE Droid goodness, head over to Amazon Wireless and grab this deal!