When the Samsung Conquer 4G was officially announced, we called it the "most affordable 4G WiMax device to date." That couldn't be more true, because now you can pre-order this device from Wal-Mart without spending a dime -- if you plan on signing a new agreement with the Now Network, that is. Current Sprint customers aren't left out in the cold, either, as you can pre-order this phone for $20 less than it will be on launch day, saving yourself the hassle of dealing with a mail-in-rebate along the way. 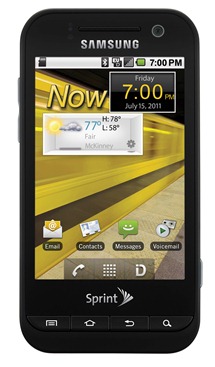 The Conquer 4G is a capable 3.5 inch handset with modest midrange specs:

This handset is set to hit Sprint's shelves on August 21 for $99 after a $50 mail-in-rebate, so this is definitely a deal to advantage of if you're planning picking this device up.

Apple Is Now Going After Motorola Over XOOM Design

Lodsys Flags Another Android Developer - Bithack, The Creator Of Apparatus. Here Is One Of ...