A little less than a week ago, Artem shared his thoughts on the keyboard dock for the Galaxy Tab 10.1. Since this was before the official TouchWiz UX (our review) came out, I figured it deserved another go, as the update fixed several issues. 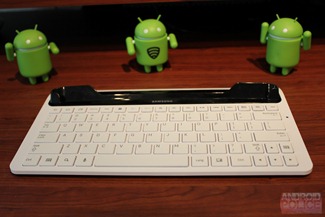 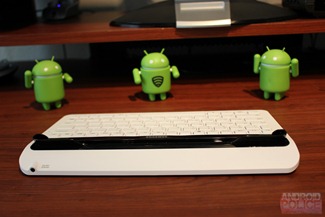 I'm only going to take on the things that were software related issues this go around, as other aspects (like design) have already been covered. However, I would like to say that, despite its likeness to Apple products, I really like the overall design and feel of this keyboard. It's clean, sleek, and looks great with the white version of the Tab 10.1.

With that out of the way, let's have a look at the things that TouchWiz UX didn't fix.

Out of all the negative things experienced with this keyboard the first go around, those above are the only two that are still somewhat intact.

So, lets move on to the things that have been fixed:

As you can see, most of the annoyances with this keyboard have been fixed with the TouchWiz UX update. However, I have one gripe of my own: lack of spellcheck. This is a pretty big deal to a lot of people, especially people who may be using their Tab on a professional level.

All-in-all, though, I really like this keyboard and think it's a great accessory to have -- as long as you're running TouchWiz UX, that is.

Germany Halts Distribution Of Galaxy Tab 10.1 In Europe (Except Netherlands) In Apple Patent ...