A while ago, I had a chance to review an app called Beluga. At first, it looked like it could be a cross-platform answer to BBM, the popular instant message service that comes standard with all Blackberrys. As a cross-platform solution, it worked well.

However, one of the problems with Beluga was that even though it was good in theory, there wasn't the user base to keep it afloat. You either had to convince your friends to use an untested product, or go back to SMS.

So when Beluga was bought by Facebook earlier this year, all signs pointed to the social networking company moving into Blackberry and Apple's messaging market. Today, out of the blue, the app is available for download for iOS and Android. The app looks to be a standalone messaging solution for Facebook users, with each message syncing across all platforms. 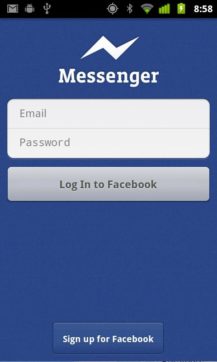 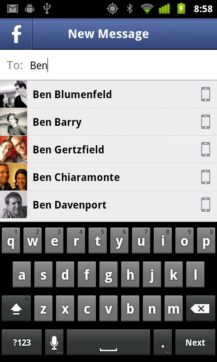 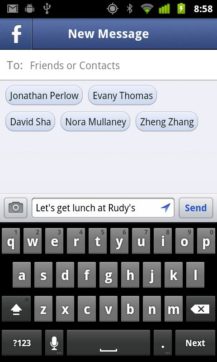 At first glance, the app doesn't seem that different from what's already in place with Facebook for Android, as the layout is mostly the same. However, this app is more dependable than Facebook's "vanilla" app, as I find messages and sync work legions better. With Facebook for Android, I found it nigh-impossible to actually leave conversations, or get them to notify properly.

However, Messenger seems to hit the nail on the head that you need everything to sync properly if you want a messaging app to work. Notifications are speedy and reliable, and you can mute conversations on a person-by-person basis, if you so wish. While not instant, the notifications come in at a reasonable pace, and I haven't had any major problems yet.

But otherwise, the app functions like the Facebook for Android messaging app with a few more improvements. For instance, users can be added to a group chat, and their locations can be plotted on a map for easy viewing. The company would like to tout this as a way to get people organized for events quickly, but unless there is a guarantee that everyone has seen/read the message (something that's been omitted from Beluga, weirdly), it still becomes a game of phone tag.

Along with group chat functionality comes photo messaging, which was a part of Facebook's desktop platform. It's really simple, and allows photos to be treated as attachments, instead of posting them to a public album. 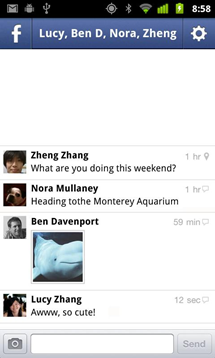 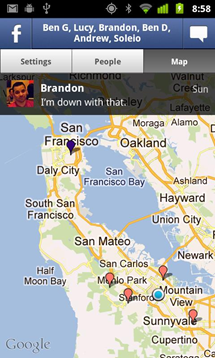 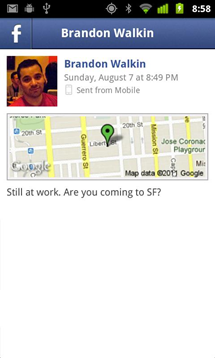 But the question remains: will anyone actually use Facebook messaging?

This is a tough question to answer, because there are so many different variables on the horizon:

This last one is important. Because the app integrates into the currently-existing Facebook infrastructure and is not its own service, you can still communicate with other people if they don't have the app. While this isn't exactly the most optimal situation, it still means that you'll get some use out of it if you use Facebook.

But I can really see this app shining if more people use it on their mobile phone, which is its intended use. With Facebook launching video chat via Skype, features like video calls or conferencing could definitely become a part of the app. With Apple launching iMessage in the near future, this could definitely provoke a race to see which one can outdo the other.

Ultimately, the point of an app like this is simple: have people send and receive messages in a timely. manner. if for any reason there becomes and issue where the chat isn't as instantaneous as BBM, iMessage, Liveprofile or whatever else, Facebook Messenger will fall by the wayside as an unreliable product. For now, however, I'll give it a pass.

As a free download that does its job well, I can give Facebook Messenger a recommendation. It takes some customization to avoid being intrusive (especially with frequent notifications across multiple devices), but it does the job well and doesn't require any new signups. That's good design.

[Book Giveaway #7] Three Of You Will Master Honeycomb Development With Packt's "Android 3.0 ...

Samsung And NVIDIA Announce The Galaxy R: Tegra 2 Processor And Gingerbread In A 4.2 Inch Wrapper