It has been nearly a day since Samsung pushed the TouchWiz UX update to retail Galaxy Tab 10.1 units across the country, and having spent most of the day playing with it, I want to share my thoughts on it with all of you.

Before we get into the details, though, I want to address one important thing: root access. My Tab 10.1 was rooted (stock ROM and kernel) with ClockworkMod recovery before the update started rolling out, so I was naturally hesitant to pull it for fear of losing root privileges. After doing a bit of research, I decided to go ahead and pull the stock update just to see what happened. Much to my surprise, once the update finished installing, I still had root access and ClockworkMod recovery. So, if you've been on the fence about pulling the update because you didn't want to lose root -- go ahead and pull the trigger.

With that out of the way, let's get into the actual review.

The installation process was pretty quick and easy. It took about ten minutes to download the entire 188MB file, which is not too bad considering Sammy's servers were probably hammered with users across the country pulling the update at the same time. The actual installation process took about 20 minutes, most of which went at a fairly stead pace. At one point I thought it had stalled completely, as it stuck at 77% for several minutes (during which I panicked), but once it hit 78% it was fine again.

The initial reboot after updating took an agonizingly long 5-6 minutes, and after unlocked the device I noticed an immediate difference. Not just an aesthetic difference, either -- I could feel the difference. Navigated between homescreens was noticeably more fluid, as was switching pages in the app drawer. There was no lag whatsoever - it was sooo smooth, but more on that in a bit.

Now for the meat-and-potatoes of the update: TouchWiz UX. This is the first major overlay to hit Honeycomb tablets, and as such, has had much controversy surrounding it. Some users looked forward to the update and all of the added features it would bring, some based their opinion entirely on previous experiences with TouchWiz for phones, while others look toward the future and feared that an added custom interface could potentially hinder other updates - like Ice Cream Sandwich for example. While I can't tell you what the future will hold, I can say one thing: TouchWiz UX is far from a hindrance or annoyance -- actually, it's quite the opposite.

One of the first things that you'll notice about TouchWiz UX is the updated navigation bar. It still offers the same functions of stock Honeycomb: back, home, app chooser, and the notification area. It also brings a feature that wasn't mentioned much before the update was released: native screenshots (no root required). To grab a screencap, simply hit the icon to the right of the app chooser, and bam -- screenshot saved. While I realize that this feature may not appeal to everyone, I can see myself using it on a daily basis. I have but one gripe about the screenshot tool: the icon. It looks more like a "maximize" icon, and less a screenshot tool -- but that's not much of a problem once you realize what it does. Still, though, I could see someone hitting this instead of the app chooser on a regular basis, which could get quite frustrating.

To the right of the screenshot tool, in the middle of the navbar, is one of my favorite things about TouchWix UX: the mini-app tray. This serves as an area to provide quick access to some commonly used tools, all without navigating away from the foreground application. A quick tap on the arrow reveals icons for a Task Manager, Calendar, World Clock, Pen Memo, Calculator, and Music Player. While I'm not entirely certain why I would need quick access to the World Clock, the rest of the shortcuts prove to be quite useful. For example, if you're sending an email and need to check a date (believe me, this happens to me all too often), instead of navigating away from Gmail or Email to access the calendar, you can simply using the mini-app. It pops up in the foreground, an when you're finished, just tap the "X" in the upper-right. 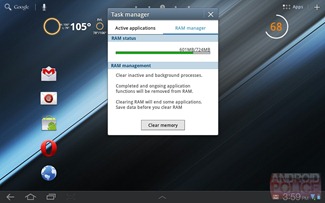 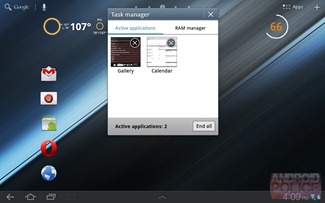 The addition of the Task Manager mini-app is one that I feel is both a blessing and a curse. On one hand, if an app is acting up, you can quickly launch the task manager and kill it. However, I'm not certain how I feel about the inclusion of the "end all" button on the Active Applications tab or the "Clear memory" button on the RAM Manager tab -- but that's a different story for a different day. 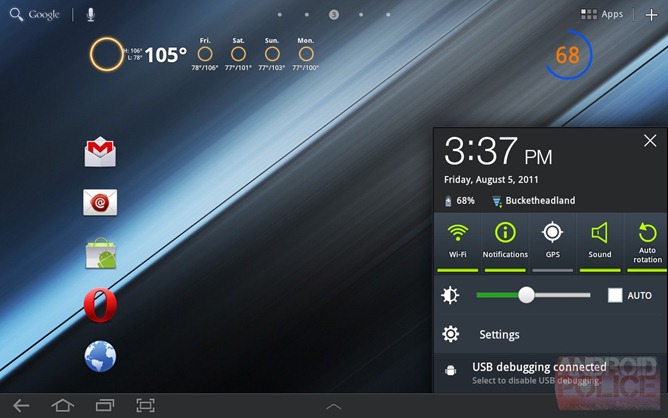 Continuing to the right you'll find yet another one of my favorite features: the notification area and quick settings panel. This is such a useful feature, I can't believe that Google hasn't incorporated something like this into stock Honeycomb by now. Inside of the quick setting panel you'll find a power widget, providing easy access to Wi-Fi, Notifications, GPS, Sound, Rotation, Bluetooth, and Flight Mode toggles, as well as a brightness slider and quick link to the Settings menu. It so convenient and useful, I already can't imagine life without it.

Applications, Live Panel, and Other Updates

The customizations go much further than that though, Sammy also threw in several proprietary apps like Samsung Media, Music, and Social Hubs; eBook, Memo, Pen Memo, Photo Editor, and My Files, an excellent file browser. While I haven't had much time to check out the Hubs, I have spent some time using the file browser - something that Honeycomb has natively lacked since it's inception. My Files is a very simple, yet functional file manager, offering most of the things that you need to explore and edit files on the built-in storage of the Tab.

A few stock Honeycomb apps have also gone under the knife and emerged with new faces, namely the Calendar, Email (not Gmail), and Browser. While the first two are going to take some getting used to, the latter is a much needed improvement. The Browser is now much more stable, faster, and offers advanced features like printing, something that I've longed for since I got my Galaxy Tab. As for the Calendar and Email apps, they're not bad per se, just different. I've yet to dig into each of them to see what changes (aside from aesthetics) have been made, but let's just say that the adjustment is going to take some time. 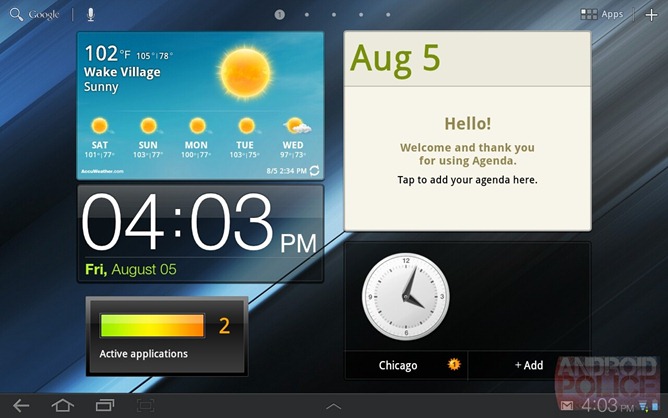 This update brought some new widgets called Live Panels along for the ride, and honestly, what can I say about them? They're widgets. They have the same look and feel of the other features in TouchWiz UX, but using them is purely optional. I opted to stay with the widgets that I was using prior to the update, as I found Live Panels to be much too large for my taste. 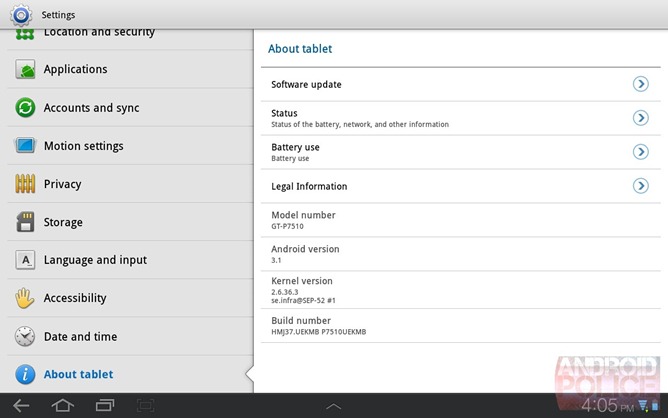 From an aesthetic aspect, one of the most drastic changes that came with this update is the Settings menu. It shed its sleek black-and-blue Honeycomb look for a coat of white and some new cartoon-y looking icons. Much like the updated Calendar and Email apps, it's not bad, just different.

One of the biggest speculations about this update is that it would slow the tablet down, but that couldn't be further from the truth. Out of all the changes that I expected to get from this update, the performance boost was a nice surprise. Don't get me wrong - the Tab was pretty fast and fluid before, but there was a certain amount of stutter when swiping between homescreens or the pages of the app drawer, but those are now things of the past. This is by far the smoothest experience I've had on any Honeycomb tablet, with absolutely no lag at all. Every aspect of the tablet is affected by this; everything from transition animations to web browsing and gaming.

The Galaxy Tab 10.1 was a great tablet when it was first released. It's sleek, lightweight, and capable. With TouchWiz UX is becomes an even better tablet, and the one of the best parts of the update is that it's very unobtrusive. If you don't like the mini-app tray, simply don't use it, just enjoy the added performance benefits. I don't feel that this update hinders the use of my Tab at all, but rather enhances it, adding functionality where there used to be none.

To answer the question in the title, is TouchWiz UX better than stock Honeycomb? For now, I would, without hesitation, say yes. Of course, there is the question of whether or not this will delay future updates -- but only time will tell.