Update 8/9/11: Cameron took the keyboard out for a spin after the TouchWiz UX update and posted his impressions here. In short, it fixes some bugs, but most of the shortcomings remain in my opinion, and my verdict doesn't change.

Some people may never end up updating to TouchWiz UX, so I'm leaving the review below intact.

Samsung Galaxy Tab 10.1 is currently my favorite Android tablet, so I was excited to see how some of its accessories, like the keyboard dock in this review, pan out. If the tablet is so drool-inducing, how bad can a keyboard dock made specifically for it be?

Well... it can be bad, to the point of sending it back and never wanting to see it again. Sorry, Samsung, but for the price ($69.99), this keyboard is not worth the trouble or the money.

Let's take a look at why.

While there are many different kinds of useful and interesting keyboards out there for both phones and tablets, the $69.99 Samsung keyboard dock is nothing more than strictly a keyboard that conveniently puts the tablet in an upright position and is made with Honeycomb in mind.

Physically, the keyboard is pretty slim but has an ugly tablet guide/holder that is sticking out, effectively doubling its thickness. Thankfully, it's removable, but more on that later. 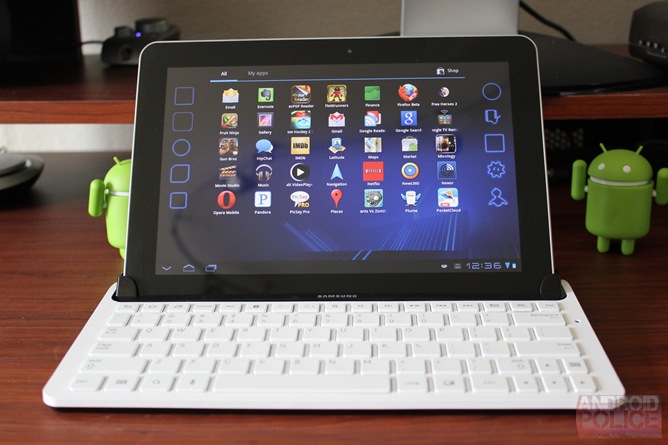 The keyboard is white, which makes it look like an Apple product. Frankly, I absolutely hate the design. It looks plasticky, and combined with the black guides makes the whole attachment look like a glorified old-school typewriter or a printing calculator. Ugh. I suppose some of you will disagree with me, but I'm putting it into the Cons pile.

The keyboard has a pass-through 30-pin connector on the right side, which you can use to charge the tablet or, supposedly, hook up peripherals, such as mice, HDMI connectors, SD card readers, and pretty much anything a USB-host capable device is supposed to handle. Too bad that the latter part is absolutely flawed - more on that in the Cons.

The only other connector on the keyboard is the 3.5mm audio jack on the back side. You won't believe it, but even the jack is flawed.

There is one LED light on the keyboard on the right side, which indicates CAPS LOCK mode - it's not meant to show whether the keyboard or tablet are on or not - strictly CAPS LOCK.

But let's move on to the [few] pros (after my 12-minute video review).

The keyboard dock offered by Samsung is a disaster at this point. It's not worth the money, and the list of cons currently outweighs the pros 15 to 3. My recommendation would be to stay away from this keyboard, unless all you need it for is typing emails or documents all day, and even then you have to use a Bluetooth mouse with it, as the USB one plain doesn't work.

A much nicer, though a lot more expensive solution - a Bluetooth keyboard/case combo - will be coming out of Samsung soon (currently listed at $130+ at Expansys), and should provide for much better experience. Update: Here it is in action:

If that's not your cup of tea, I suggest exploring regular USB or Bluetooth keyboards and combine them with a simple upright stand - you will save a ton of money, and your keyboard will be compatible with pretty much anything else on the market.

This concludes my review, but if I missed anything, don't hesitate and ask down below.