Heads-up, Revue owners! We've got a nice little surprise for you all this morning. A member of the GTVHacker forums has posted about a leaked beta of Android 3.1 for the Google TV device, and the good news is that you can download it right now!

The update looks like is an official one (signed and hosted by Google/Logitech), as you don't need to be rooted to flash this on to your device; you can apply it like you would any other operating system update with no root necessary. However, as this is a beta version it will have some bugs lurking around in it and more importantly you cannot roll back to a previous version once you have updated the software, so do this at your own risk! 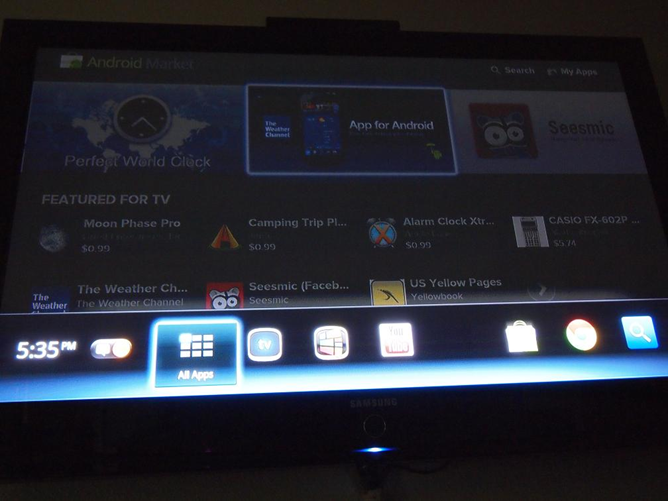 The developer has also posted a list of what works well with this latest update and what doesn't work so well. Most noticeably, he comments that there are now live wallpapers available in this build, the Android Market is present, and the system as a whole performs smoother than before.

However, the Atom CPU inside the Revue seems to be incompatible with the vast majority of applications currently on the Market, so you may not be able to give it much of a workout once upgraded. Also, Google Apps doesn't currently work, nor does Netflix. Finally, if you're keen to use the Revue as an actual TV device then you may want to hold off until the final launch, as it is also reported that there are sound problems present, such as the volume muting during channel changes.

-Sound problems while watching TV including sound turning off during channel changes and playing/pausing (Remedied by changing the channel or pressing the play/pause button a few times)
-NO NETFLIX!
-Some apps display content vertically
-No root so far (also this means that we are still stuck with content provider blocks for non rooted devices)
-Once you upgrade to this build there is currently no going back to 2.1
-Atom cpu is incompatible ith 99.9% of the stuff on the market
-GAPPS does not work, or at least we haven't been able to get it to.

Logitech Media Player is awesome. It reads pretty much all video formats that I have (.mkv, mp4, m4v, avi, wmv, mpg, etc) I am very pleased with this. It also seems to have better indexing.

If you do wish to apply the update to your Revue, then you can download the image from here and copy it to a USB drive to connect to your device (rename to update.zip first).

Update: Here is the same file hosted on Google's own servers, which means this update is very much official (but still very beta, of course).

Has this latest update tempted you to buy a Revue all over again? Don't forget that the price has now dropped to $99, making it much more affordable. If you are updating, then be sure to let us know how you get on and if you encounter any problems!