An email just hit our inboxes directly from Samsung, inviting us all to join together in NYC on August 3rd for the official unveiling of a "major software update" for the Galaxy Tab 10.1. 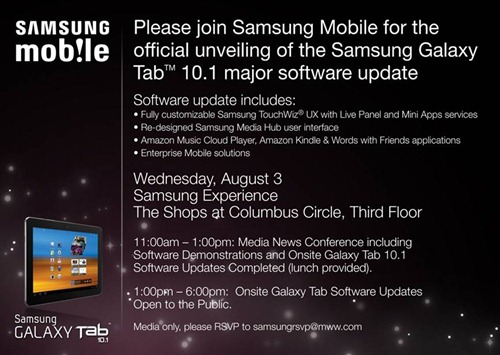 We have known that this update was coming for the past several weeks, but now we can finally lock something a bit more concrete down. According to the above image, onsite Tab 10.1 updates will be open to the public at the event, so I wouldn't be surprised if we started seeing a national rollout begin that very same day.

For those who are unaware, TouchWiz UX will bring a lot of useful features to the device, including a mini-app tray for quick access to frequently used applications and an infinitely useful notification area power widget. The update doesn't stop there, though; it will also usher in mobile printing, a tablet enhanced version of Swype, a device tracking service called FindMyMobile, functional Samsung Hubs, and a few new apps; including Amazon Cloud Player, Amazon Kindle, and Words With Friends.

Fore an in-depth look at the Galaxy Tab 10.1, including TouchWiz UX, have a look at this video:

[Unconfirmed] New Details Leak Out About The HTC Vigor, Thanks To NenaMark

Angry Birds Updated, Gets 15 New Mine And Dine Levels