Update: It looks like someone in Sony's camp got a little overzealous concerning this update, as it's actually not available just yet. According to the Sony Ericsson Product Blog, the launch is coming, but "[they] just need more days before [they] can push the button." We'll keep you posted of any developments on this front -- like, you know, when it's actually available.

Owners of the Sony Erricsson Xperia X10, make ready your computers - the official Gingerbread update is ready and available to download. The update brings many new features aside from the goodness of Gingerbread, including Facebook inside Xperia, Sony's take on Facebook integration; Wi-Fi hotspot and USB tethering, a new music player with equalizer, photo widget,  and app tray sorting. 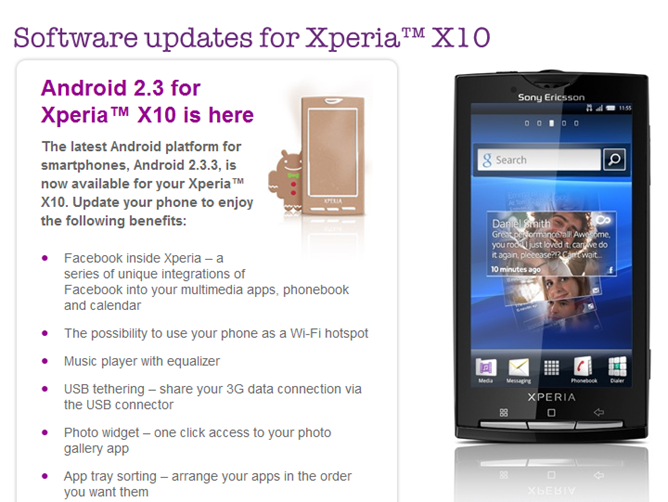 There are some downsides to the update as well:

To grab the update, head over to Sony Ericsson's Xperia X10 landing page; if you don't already have PC Companion installed, you can grab that from the download link as well.

[Update: Ready To Rage?] Verizon's Samsung Galaxy S II Will Be 4G LTE Enabled, According To The ...