Android seems to have become infested with games that have a large amount of things in common: they all pay homage to an extremely-successful Xbox game, and have won the hearts of players the world around.

Spirit plays a lot like Hyperlight, a game I've previously reviewed. The graphics are extremely similar in that they pay homage to Geometry Wars, and both take place on a flat, 2D plane. Spirit, however, has different mechanics that set it apart: instead of relying on twitchy tilt controls, your faster-than-light spacecraft is steered by your finger.

Lacking an on-screen joystick, I can only describe Spirit's controls as "relative." They don't require any specific positioning - instead, drawing a circle anywhere will make your ship fly in that pattern, even if it's nowhere near where your ship actually is. This actually fixed a problem a lot of these "drag by flying" games have: you can still see your character, instead of the sprite being blocked by your finger.

Gameplay in Spirit is pretty simple, in it requires you to draw circles around waves of foes in order to defeat them. Making your ship fly quickly makes it leave behind a line of exhaust, which can be connected in order to form a deadly bubble. This bubble kills enemies, and can be linked to others in order to score combos.

It's actually quite intuitive, once you get the hang of it. However, that learning curve is a bit steep in that it's extremely easy to fly straight into a spawning enemy without having time to react. The game conveys a sense of speed very well, without the limits that Hyperlight had; instead of searching for power-ups to refill your faster-than-light meter, you're free to putter around the levels to your heart's content.

What surprises me about this game is how precise you can be with the steering. The developer has obviously taken the time to fine-tune things to a hair's-breadth; you'll be surprised at how easy it is to dip and dodge around the tiniest of spaces. You almost get a little cocky weaving around enemies, which pays off with big bubbles and bigger combos. After a bit, you lose the skepticism about whether or not you can make gaps and you just start going for them.

Spirit has three gameplay modes that players can challenge themselves with: Classic, Extreme and Pulse. Classic is the default game mode, where you draw circles with your trails to eliminate waves of enemies. Extreme amps up the enemy count, giving you a tougher challenge. Pulse, however, removes the trail mechanic entirely: in order to eliminate enemies, you fly into bubbles which float around the gameplay field. Depending on their color, they produce big or small death fields. 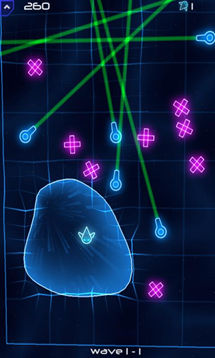 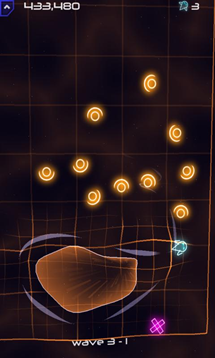 I found Pulse to be the most enjoyable game mode, as there's not much to concentrate on besides where you are and where you're going. With Standard and Extreme, I found myself unsure of the speed at which my trail would activate, leading to some overcompensation and death. I suspect this would get better over time.

While this game is somewhat original, it really takes a lot from Geometry Wars. Some enemies at least have the courtesy of different skins, but some are ripped straight from Wars, and perform the same purpose. They're the same because the original concept works, but it would be nice to see some creativity.

At the end of the day, Spirit feels like a mini-game that would be included in Geometry Wars rather than a full-fledged title. Besides a high score list, you're not going to find much re-playability, but I believe it is worth the price for a competently-coded, fun game. Geek Overload: CyanogenMod 7 Now Has The Option To Show Exact Signal Strength (In dBm) Instead ...