Usually, when video games and zombies cross paths, the latter end up being our enemies. Because of their slow, plodding and plentiful nature, target practice against zombies is a fun (and scary) endeavor. However, in Com2uS' newest title, you're put in a unique position: this time, you're trying to save a zombie from his untimely death.

In Zombie Runaway you take control of a zombie who is running away (duh) from "evil" humans. In its way are multiple gravestones, monuments and spiky barriers that can all spell doom for our unlikely hero.

These obstacles come at you from one of three lanes; you can shift left or right to dodge, or jump straight over them to continue. The game basically acts like a marathon; progressing farther along the course and picking up coins along the way give you a higher score.

Scores can be shared on Facebook, and leaderboards can be pulled from your friends' scores, as well. Otherwise, this is a pretty simple title that's well-executed. 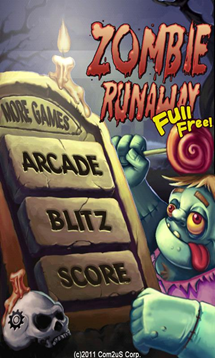 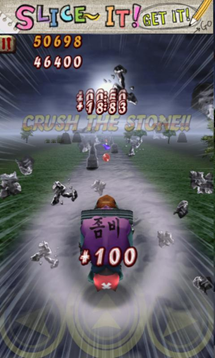 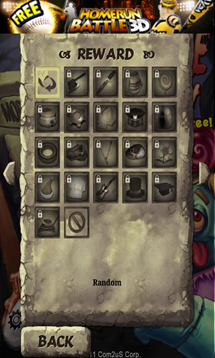 The game is completely free and supported by ads, which adds to its approachability. The game comes with two modes: Arcade, which is a simple "run until you don't have any more lives" game, while "Blitz" challenges you to go as far as you can within a certain time limit. Besides these two modes, there isn't much variety to gameplay.

Much of the re-playability comes from a semi-hidden achievements menu (shown above) that gives you different vanity items for your zombie upon completion. While this isn't exactly the most robust system in the world, it does its job: it gives you a reason to pick this game up again and try to hit that particularly pesky score.

In essence, Zombie Runaway is a very simplistic game that does its job well. I can't imagine playing this for any stretch of time, but it's pretty to pick up and play when you need to kill some time.