If you've visited Android Police over the past weekend, you've probably already seen my enthusiastic review of Total Commander for Android, which for me is replacing both ASTRO and Root Explorer going forward as the top Android file manager. Ad-free, $0, root support, dual panes, plugin support, and other advanced functions, which you can read about in the review, make Total Commander an easy choice for both novice and advanced users.

However, one task that is not immediately achievable (or so I thought) with Total Commander is something that sits right at the core of Root Explorer - writing to read-only partitions, such as /system. Root Explorer has a handy "Mount RW" button, which re-mounts such read-only partitions for writes, but Total Commander doesn't seem to offer this functionality. Bummed, I emailed the developer with a feature request, only to be enlightened by a helpful reader Sleeepy2 minutes later.

Apparently, I could re-mount partitions as read-write in Total Commander all along, and now I'm passing this knowledge to you.

Remember the button bar which can be customized with your own shortcuts and commands? Turns out Re-mount is one such command. 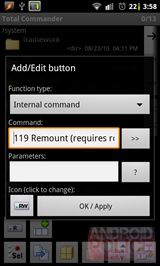 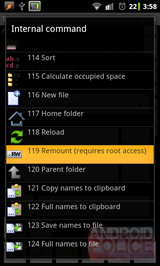 Now you can press this button whenever you find yourself in a partition that is read-only. Here's me doing it in /system: 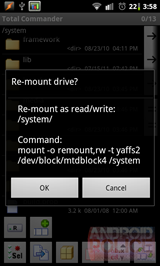 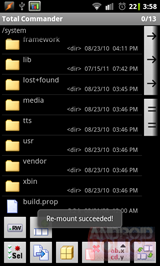 P.S. If you still haven't gotten Total Commander for Android, you can pick it up here.

[New App] AmazonFresh Makes It Easy To Buy Groceries And Have Them Delivered... As Long As You ...