After a delay, Sprint has unveiled the much-awaited Android 2.3.5 update for the Nexus S 4G, and it will start rolling out Monday, July 25th. The update brings a much needed fix for bogged-down 4G speeds on the handset, which have plagued users since the phone's release.

Additionally, some Wi-Fi bugs have been exterminated, the speakerphone should sound better, and TTY support for deaf users has been added. You'll also get a 4G toggle widget (update: maybe not), and NFC will officially be enabled. Here's Sprint's statement on the update:

Nexus S™ 4G is getting a software update designed to improve 4G data speeds for users and provide several other updates. The release will begin rolling out to Nexus S 4G handsets on Monday, July 25. All users should receive the update in the next three weeks.

In Sprint's preproduction testing, Nexus S 4G showed excellent performance. After receiving feedback from a small number of our customers, we conducted a secondary analysis of its performance with our partners at Google and Samsung and were able to identify some ways we could boost performance on Nexus S 4G.

These enhancements should increase 4G data speeds and signal strength for users. The software update also improves Wi-Fi connectivity, speakerphone audio quality and adds TTY support for the deaf and hard of hearing.

So, has 4G speed actually improved? Engadget did some empirical testing, and it appears the answer is "yes" (the left half is with the new update, the right with the old): 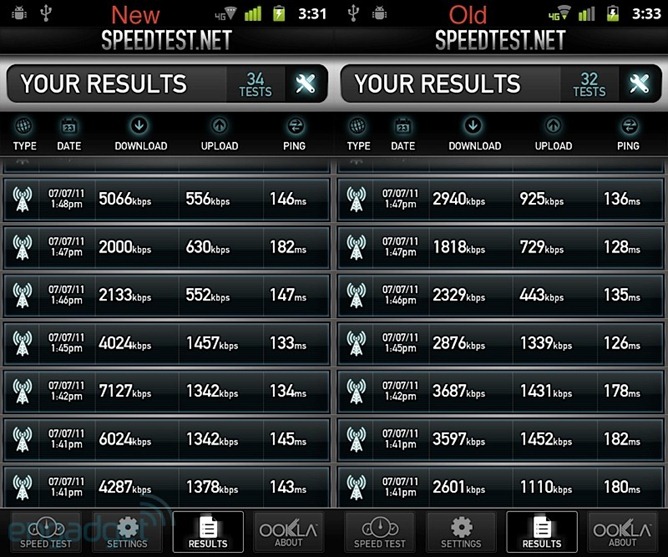 It appears Sprint really has worked out the bugs, and WiMAX performance is back to its intended levels. The update, again, will be rolling out Monday (July 25) - so start obsessively checking your "System Update" menu in the next few days.