Well, it seems Lodsys has gotten a lot more gravitas in the last few months due to the success of its patent-trolling efforts. The company's legal reps have amended a complaint filed in the Eastern District of Texas (also known as the "rocket docket" district for the speediness and plaintiff-friendliness of its trials), and it's a doozy.

Lodsys has sued Rovio over Angry Birds for Android (and iPhone), along with Electronic Arts (EA), Atari, Square Enix, and Take-Two Interactive - and many others (37 total, in fact). The latter publishers were all sued for iPhone games. 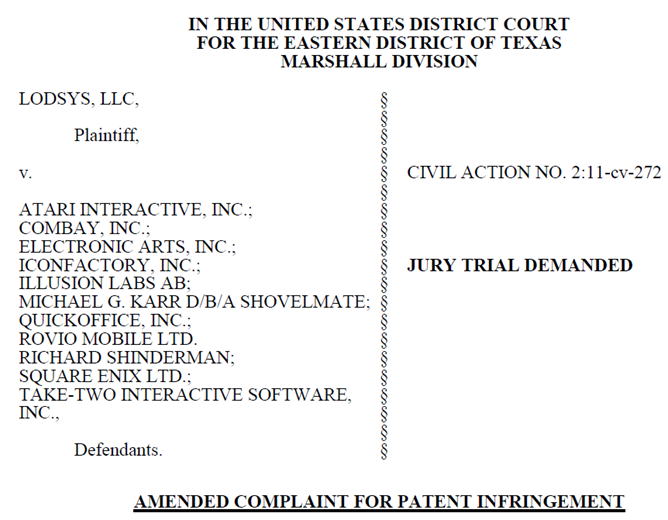 This, in our book, says little for Lodsys's credibility. Filing a suit in the district where a win is easiest and quickest to obtain against such big players in the mobile game sphere doesn't say much for the confidence the patent clearinghouse troll has in its assertions. Why? Because it's clearly an attempt at intimidation. If Lodsys's claim makes it past the preliminary stages and a trial is scheduled, small developers across the world will be left with even more doubts about Google or Apple's ability to protect them from these extortionist activities.

A win for Lodsys at the trial court level wouldn't be out of the question - and such a decision on appeal could take many months, even years, to finally come down. Meaning the company would buy even more time to force smaller developers into unfair royalty agreements. But it seems Lodsys is finally picking on several companies its own size (or larger), which we find a little less "scumbaggy" than their current practice of sending threatening cease and desist letters.

We'll see how this all plays out in the coming months.