Nevertheless, after trying to find it in the Market using devices that were previously unsupported (HTC EVO 3D and Thunderbolt), to our pleasant surprise, we succeeded. So... it seems that Netflix indeed simply updated the list in the Market publishing console without updating the app at all, which means it was compatible with all of them all along.

Update #1: We're seeing some reports of the app not running on the Thunderbolt due to the absence of a DRM license and crashing on other phones, like the Charge, Fascinate, Epic, and Droid 3. Notably, the EVO 3D seems to be working OK. Perhaps we'll need to see that 1.3 update first after all? What's the deal here, Netflix?

Update #2: The 1.3 update is now finally live in the Market - everyone who downloaded the 1.2.2 version earlier, go grab it and report back!

Update #3: The 1.3 APK has been extracted and is available for download, it appears to work on a slew of "unsupported" devices - including some Honeycomb tablets! 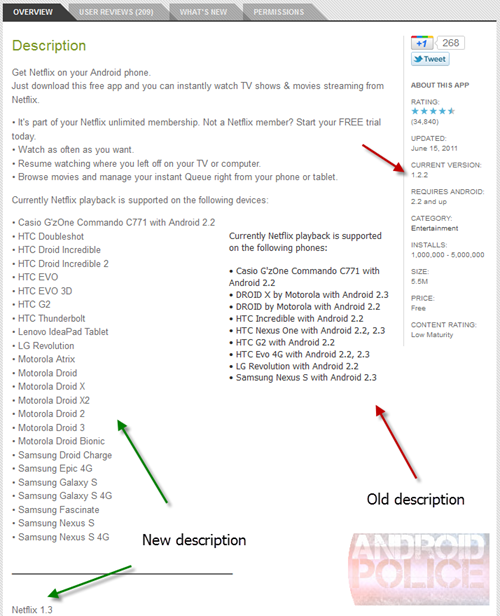 As compatibility is key for the service to spread on Android, any update that allows more of us to watch the movies we love is a great move.

Curiously, note the presence of the yet unreleased Droid Bionic, HTC Doubleshot (myTouch 4G Slide), and the Lenovo IdeaPad tablet, which seems to be the first Netflix-certified Honeycomb tablet. Still absent is support for any other Honeycomb tablet, which I know a lot of people will be disappointed to hear, as well as the Nexus One, which strangely disappeared from the list.

The app is also still region-locked, so anyone looking to get their hands on it outside of the States will have to wait. Check below to see if your model is supported.

Notion Ink Adam 2 Set To Launch In December, Possibly With A Tegra 3 Onboard - Are You ...