Since I upgraded my antiquated HTC Magic to the shiny (and slim) Samsung Galaxy S2 I have spent most of my time downloading new games, a significant fraction of which are the so-called "casual games". These games usually cost between $0.99 and $2.99 and are of the Farm Frenzy, Angry Birds and Plants vs. Zombies variety. I tend to download a few, play them non-stop for about a week and then let them languish inside an aptly named "Old Games" folder. If you are like me, then have a look at the newly launched all-you-can-eat mobile gaming subscription service GameTanium Mobile from Exent. 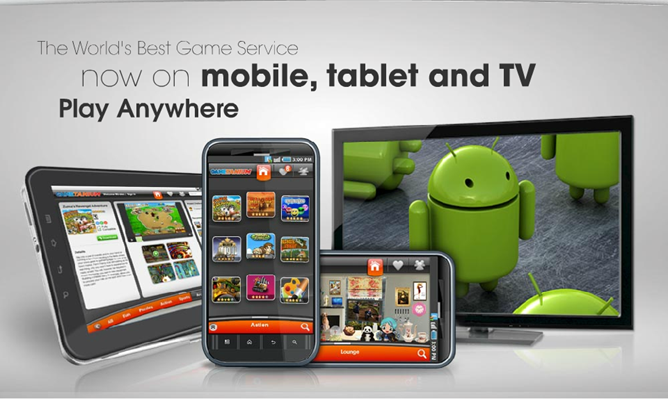 The gaming distribution platform, GameTanium Mobile, will offer unlimited playability of a variety of the "hottest games" on the Android platform, including Farm Frenzy, Speedx 3D, and The Secret of Grisly Manor all for $4.99 a month. Right now there are 75 games available, with new games added weekly. It is hoped that there will be over 200 games by the year's end. That seems like a great bargain at $4.99. However I am concerned about what happens if you really like playing a game and the developer decides to pull it from the GameTanium market or what happens when you stop paying the subscription fee? It seems unlikely that access to the games will still be allowed.

In addition to its stable of games, Exent is also touting GameTanium's robust game discovery feature, which is still an unpolished process in the Android Market.

The press release also seems to indicate that the service is targeted as much towards consumers as it is towards carriers, allowing the latter customised branding, pricing, packaging, and dedicated support. Hopefully, this service will not become abused by carriers into yet another crappy branded market.

Since low cost casual games form the bulk of the smartphone gaming market, GameTanium has a good opportunity to make an impact. In the end the consumer will have to weigh the monthly subscription fee versus the game titles available and their quality.

To use the subscription service you have to head over to the GameTanium website and download their Android app for a free trial. The GameTanium Mobile app (much like the Amazon Appstore) is an alternative to the official Android Market, and must be "sideloaded" onto your phone by allowing "Unknown Sources" to install in your phone's application settings (Google doesn't allow other app stores on the Android Market).

NEW YORK, July 18, 2011 /PRNewswire/ -- As the leader in powering Games on Demand offerings, Exent today launched its new distribution platform for Android, GameTanium™ Mobile, the first and only all–you-can-eat subscription service for mobile devices offering unlimited game play of the hottest games on Android, including Farm Frenzy, Speedx 3D, and The Secret of Grisly Manor. Available now to consumers through a free trial at www.gametanium.com/mobile, the service draws on Exent's experience and success in merchandising and monetizing games.

Exent is the PC games on demand provider to many of the world's leading operators, including Verizon, Mediacom, and T-Mobile. With the launch of GameTanium Mobile, operators can extend their brand, games offering and subscriber engagement to new screens, increasing average revenue per user (ARPU) and strengthening brand loyalty and retention. Since the advent of smartphones, mobile game play has grown dramatically each year, but the open nature of the Android market has limited the role of the operator or carrier. GameTanium Mobile was built specifically with carriers in mind, leveraging Exent's content and programming expertise along with carrier channels and billing to increase conversion exponentially and provide a healthier ecosystem for monetization on Android.  As with all Exent products and services, GameTanium Mobile accommodates carrier needs with customizable elements ranging from a brandable UI to pricing and packaging. The service also comes with Exent's strategic guidance and sound advice based on years of games and operator experience, as well as from valuable business intelligence collected through user testing and optimization of Exent's own GameTanium Mobile.

"Exent has successfully powered Verizon Games with its Built with GameTanium offering since 2005," noted Jason Henderson, Games & Music Services Product Manager at Verizon. "We look forward to its mobile counterpart to bring the benefits of the Verizon Games subscription to our users wherever they want to play."

"GameTanium Mobile is a win all around," says Christina Kuzma, Chief Marketing Officer at Exent.  "For carriers, it bolsters their value added services and supports their multiscreen programming strategies. Game developers will benefit from a positive impact on conversion with integrated billing options and increased discovery due to the apps rapid-browse UI and advanced programming. For consumers the value is clear, with unlimited access to over 75 great games at launch with new games added weekly."

The service is currently available for a low monthly fee of only $4.99 and is expected to grow to over 200 premium Android games by year's end. With thousands of Android games offered in the Google Android Market but close to 99 percent comprised of demos, spam, broken apps or just boring games, the service was designed to showcase only the best apps optimized for the Android platform.

"The success of Farm Frenzy, Treasures of Montezuma, and our other game franchises on Exent's PC platform has us eager to repeat that success on GameTanium Mobile. The Android platform has its challenges, but we believe that our cooperation with Exent will greatly increase the number of people playing our Android games," said Daria Yurashanskaya, Alawar Director of Partner Relations.

GameTanium Mobile is now available for Android smartphones, with compatibility for other mobile platforms and devices including tablets coming soon. Visit www.gametanium.com/mobile or from your Android device at mobile.gametanium.com to download a free trial.

Android publishers and developers can learn more about adding their apps to the service by visiting Exent at Casual Connect Seattle from July 19-21, 2011 at Benaroya Hall, Booth b17.