Ok, we've all seen enough post-apocalyptic movies to know what the deal is here. An obscene level of asteroids has suddenly decided to wreak havoc upon this wonderful planet of ours, and it is your job in Asteroid Tower Defense to set up a space defense capable of taking the bloody things out.

Tower Defense titles are certainly not new to the Android platform, with games such as Fieldrunners HD and Tower Raiders already in the market, and the concept is simple enough, but as you progress through the levels, things get considerably harder as the asteroids increase in size and speed. The graphics and overall polish are excellent, which adds a lot of value to this game. 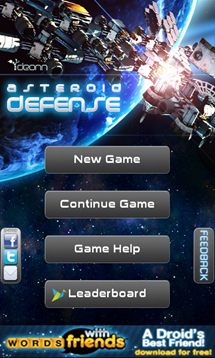 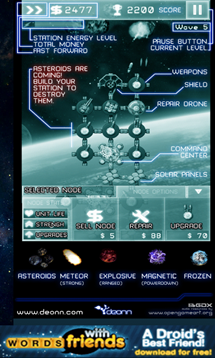 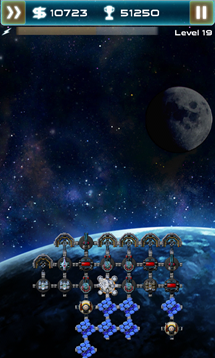 When setting up your perimeter, you begin with a command center and two solar panels to power your operation. Of course, solar panels aren't going to be much good on their own when you need to take out large asteroids, so you also have a variety of weapons which you can choose from, and they can be attached to either side of existing units.

Depending on how much money you have in the bank, you can take your pick from eight units:

Each unit has different attributes and ranges. A blaster gun for example, has a rapid fire but low range, whereas the rocket launcher is much slower at firing but has a longer range. You can erect shields around your units to stop them from being destroyed in many of the blasts that will be occurring as the game progresses, and you need to have more solar panels depending on how many weapons you build up.

As you advance through each level, some upgrades will become available for your existing weapons so you need to keep an eye out for those, as the targets will become a lot tougher too. So not to make it too easy for you, there is a limited amount you can purchase at any time depending on how much money you have. In the early levels, I didn't find myself needing an abundance of weapons, and as the game goes on you have more than enough to buy what you need as you get more cash for every asteroid that your weapons take down. 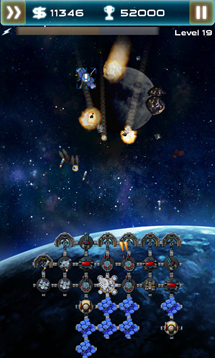 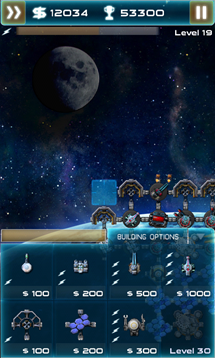 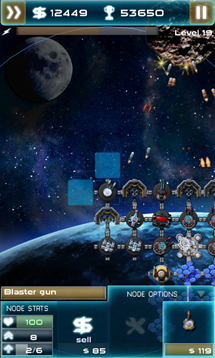 I was really impressed at the graphics of Asteroid Defense on my Nexus One. All of the units on the screen looked crisp and well detailed, and there wasn't any hint of a slowdown when there were lots of incoming asteroids and shots being fired all at once.  All of the different weapons being fired at the same time made for a pretty spectacular fireworks show - even if it was only 3.5 inches big - and it will undoubtedly look even better if you have a larger device.

As this is 2011, every game and its sequel has some kind of social aspect built in it, and although Asteroid Tower Defense is a little light on the social side, it does have a community high score ranking so that you know how you're doing compared to other players. This is worked out based on the total score you achieve during the game. If I were the developer, I'd have thrown in the option to share your score on Twitter or Facebook, as it would most likely result in more people knowing about the game, but it isn't a huge miss for most users. You achieve points through destroying units and building up your military presence in orbit, although you can get extra points easily by tapping on special missiles which make their way down your screen with the asteroids. These missiles have various abilities, and depending on which one you tap you may receive some more cash to help build more units, heal all of your existing units back to full health, wipe out all of the asteroids that are currently on the screen, and get additional points too. 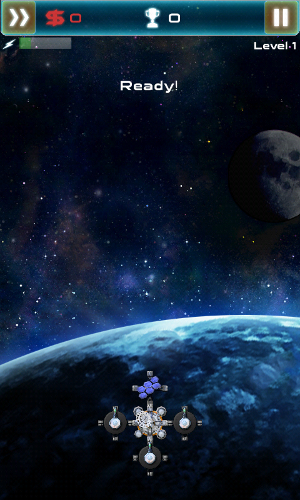 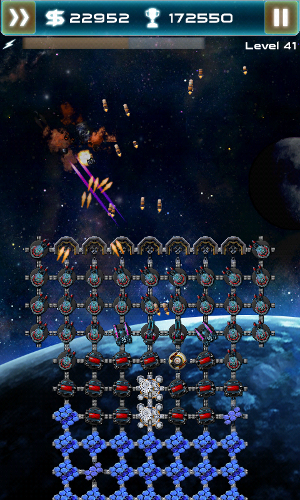 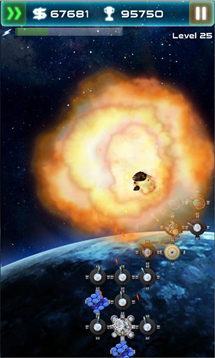 As this is a free game, it is ad-supported. I would personally rather pay for a title and have no ads than have a free game which throws ads in your face whilst you're trying to save your planet (these things can get a little distracting, and as much as I do love the capitalist nature of our species I'd rather spend money on a planet that hasn't been wiped out by asteroids, thank you very much). It is fortunate, then, that the ads in Asteroid Tower Defense are few and far between. One would occasionally appear at the bottom of my screen, but most of the time the only ads you saw were saved for the gap between levels where you were given a menu to choose from. Despite this, I would like the developer to consider placing a paid title of the game on the Market as well for those users who would prefer to play without ads.

This game is probably the most addictive mobile title that I've played in months. If I hadn't been so engrossed, you would have probably seen this review about 2 hours earlier. For a free title, it's incredibly well developed, stable and really enjoyable to play, so get down to the Market, or click on the link below, and download it to your phone or tablet!

Update: We've gotten some comments from the developer:

- In-app purchase to remove ads, so you won't have to download another copy of the game.

- A screen called Space Market, where you can use your points to buy new weapons and upgrades, and then select the units you want to play the next level

- We haven't defined yet, but some type of mission and survival modes, maybe a mix of both

- Support for multiple save games

[Weekend Poll] Do You Actually Read App Permissions Before Accepting?