No, it's not. At least not for Android - and that's what we're here to talk about today. The merits of Spotify as a music streaming subscription service for your desktop are substantially greater - it's well organized, searching and streaming are quick, powerful, and pretty. There's a lot to love - and at $10 (or free for ad-supported and no Android playback) a month for unlimited streaming, those plusses are hard to argue against.

Unfortunately, if you plan on using Spotify on your Android device, there's a lot less to love, unless your musical needs are very specific. Spotify for Android is good for one thing: finding music. In fact, as an Android music streaming and playback app, Spotify is really pretty terrible, and I'm not being hyperbolic - the app has major issues that I just don't see users glossing over and forgiving. Let's start with the basics.

Just sign up, launch into the app, and get searching for your favorite tracks. You can add them to playlists individually or just play a track now, and when they start playing, just hit the "i" logo to the right of the player controls to add the whole album to your playlist, see more of the artists' albums, their biography, and top hits according to Spotify. 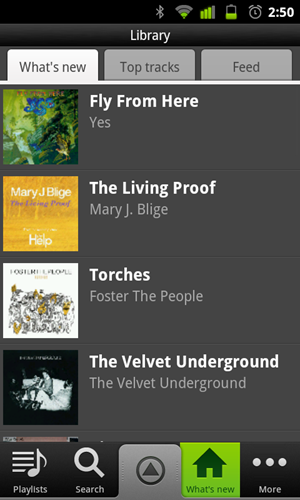 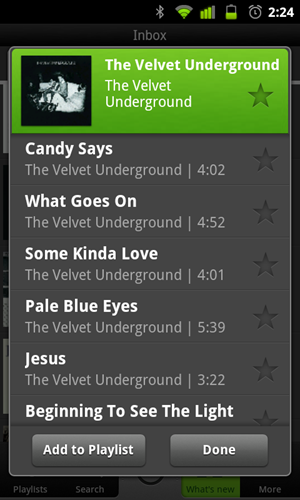 Finding music is where Spotify shines. It is by far the best music search application on Android, and is a great way to find tracks and albums individually, or by artist. And you can find most anything - from classical to top 40 hits. This is the only really good thing I have to say about Spotify, and if I was looking for a desktop streaming service (and could afford to pay for one), I'd ditch Pandora for Spotify in a heartbeat - no questions asked.

But we're here to talk about Android.

The app itself is sort of the bastard son of an iPhone layout with Android elements. They've gotten rid of really obvious iPhone-y stuff like a "Back" button in the interface, but the settings menu is displayed inside the app (not as an Android OS menu), and there's the 4 tabs at the bottom of the app for Playlists, Search, What's new, and More. Along with the odd pop-up windows and iPhone-ish buttons, the app just doesn't feel like it quite gels with the Android look and form.

One good (and creative) part of the UI is the intuitive, if odd, pull-up music player - by the looks of it, they took some inspiration from Android 1.6's app drawer. Either way, it works. 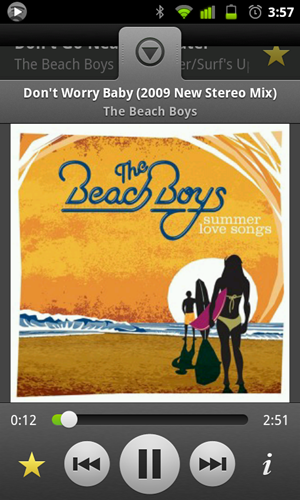 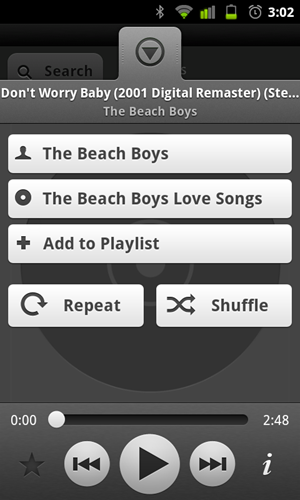 Performance is so-so. When tracks are playing, scrolling and bringing up the "now playing" drawer-thing are noticeably laggier than they should be. So, as an application, Spotify gets a narrow "pass" for basic functionality and adherence to Android design/performance minimums - I've seen apps that are far worse in regard to feeling like "ports" from iOS, and there are many apps that perform worse than Spotify. But what about really using it?

It works. Streaming songs is pretty snappy (snappier than Pandora), too. Spotify has two streaming quality settings - 96Kbps, and 160Kbps. 96Kbps is what Pandora considers "High" quality on its Android app - and songs at this bitrate will drink down your data at a substantial, thought not absurd, rate. For every 10 minutes of music, Spotify will consume 7MB of data - assume you do that an hour a day, multiply by 30 days, and you have around 1.2GB of data usage a month. On the "high" quality setting, that number ends up closer to 2GB. 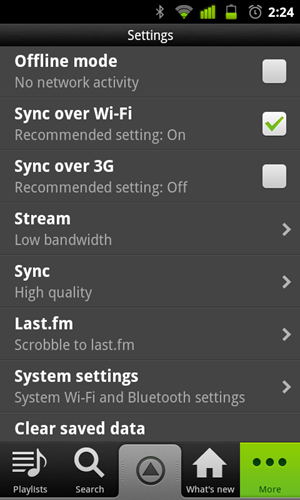 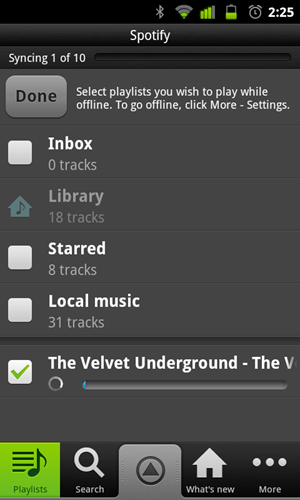 But Spotify allows you to sync tracks you've selected and placed in your library to your device locally - eliminating the need for streaming them. Unfortunately, the speed at which it syncs these tracks is abominably slow - a single album (LP length) took me well over 20 minutes. You can also sync directly from your computer to speed up the process (Spotify's desktop app discovers your local music, which you can also then sync to your phone):

Unfortunately, Android syncing can only be accomplished via your local wireless network. If you're on a wired LAN at work, or have no Wi-Fi access, you can't sync - not even by USB. This seems incredibly stupid to me, and prevented me from even testing this feature. At this point, I was unsure of my verdict on Spotify. Then I tried to actually find the music I'd added to my library.

Spotify doesn't use hierarchies to sort your music in the app. This includes any local music it detects on your SD card (which is seemingly 100% random in what it finds). This, to me, was the death blow for an app that was "on the fence," so to speak, already. If you go into your "Library" with any amount of songs, you'll find this cluster[redacted]: 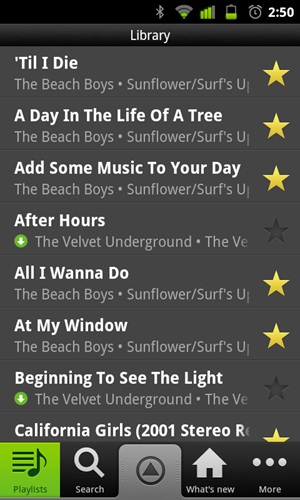 As you can see, Spotify sorts tracks in your Library by name. There are no other sort options. So, imagine with me, if you will, that you have 100 songs. That would be doable to sort through by hand, right? What about 1,000? Sounding a lot less practical? It is. In fact, it is nearly impossible to navigate your library through the Spotify app, and it was at this point that I lost all interest in Spotify. This is just bad app design, and it's laziness on the part of Spotify's developers, and I can't forgive it.

Why did they do it this way? Because Spotify would prefer you use playlists to sort your tunes. Let me say this: playlists are for playing lists of songs. They are not for sorting your 100+ album collection into a giant, unwieldy, scrolling list - if Spotify will even let you load that many playlists. It's here the Spotify goes from being borderline-OK to flat out unacceptable.

Spotify for Android has a long way to go before I'd call it a real streaming solution. A total re-think of the way the app handles sorting and syncing is going to be necessary before I even want to give it a second try. It just isn't worth the very important things I'm losing. Spotify lacks features that even the official Google Music app has (hierarchies, easy sync) - and that's a sad state of affairs.

Now, on the desktop, Spotify is brilliant. If you're looking for a Pandora alternative, look no further. For $5/month, you have a solid desktop music streaming experience - minus offline playback, enhanced sound quality options, or any sort of smartphone/accessory playback functionality. But if you want mobile features (read: to be able to use the Spotify app), you'll have to get Spotify Premium, which is $10/month.

Frankly, I'm happier buying my MP3's on Amazon and playing them wherever I want, whenever, forever. Spotify's a good concept (especially compared to Pandora), but its mobile execution leaves a lot to be desired. That's not to say it's unfixable, but I'm not exactly holding my breath on some of the shortcomings being addressed in a timely manner.