The upcoming Motorola Photon 4G for the Sprint network has been made available for pre-order on Wirefly. While a ship date isn't listed, we know the Photon is being released on the 31st - meaning you can probably expect to receive yours on or a little before that date, if you opt for overnight shipping. $180 will get you on the list for the Photon, but you'll have to be a new Sprint customer to swing that deal. 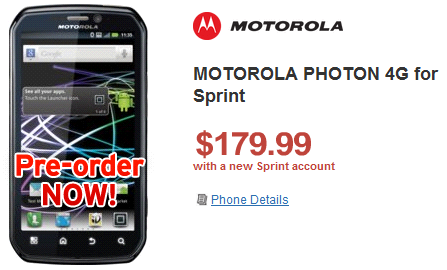 The Photon 4G is basically a reworked version of the Motorola ATRIX 4G, with a larger display and access to Sprint's WiMAX network. It will have a WebTop dock similar to that of the ATRIX, though pricing and availability on that accessory remains unknown at this point. The Photon is powered by an NVIDIA Tegra 2 dual-core processor, so you'll be able to play all those awesome "HD" games available on the Market as soon as the developers add the Photon to their supported device lists.

Picking up a Photon instead of an EVO 3D? Or will this just be another ATRIX-flop with an overpriced dock? Let us know in the comments.