Coupled with the Market update that was announced and subsequently leaked earlier today, Google released a new version of the Videos app, previously available only on certain tablets. Because the new Android Market adds support for movies, among other things, the much needed update to Videos opens up access to devices running Android 2.2 (Froyo) and 2.3 (Gingerbread).

Now to some bad news: as suspected, if you are using a rooted device, you will be able to run the Videos app but won't be able to play any content through it. Paranoid Google is paranoid, some meme lovers would say.

I'm going to leave this warning here: do not purchase movies if you're rooted, as your purchase will actually go through, and your credit card will be charged, yet you will be greeted with this screen: 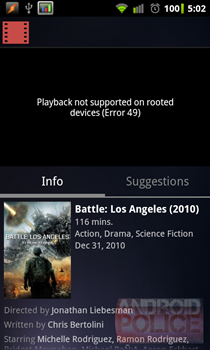 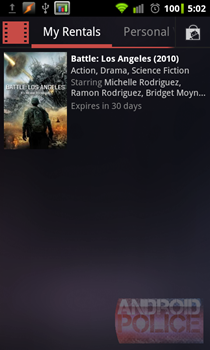 Tip: If you want to request a refund for a movie you purchased that refuses to play, head over to the form on this page.

Considering the amount of rooted devices and Google's overall friendliness towards rooting, I'm curious how long it'll take them to figure out a way to take our money. I hope the answer is "soon," because the flood gates are now open, and thousands of enraged Android fans are reaching for their pitchforks.

And The Five Winners Of The Android Police Book Giveaway #4 Are...