Earlier today, Mika Mobile, developer of the popular game Battlheart, released their popular iOS title Zombieville USA on the Android Market. You can pick it up now for $2. What exactly is this game? Mindless sidescrolling, shoot/bash-em-up 2D action. This was Mika's first game release, and it's just now been ported to Android. Unfortunately, the gameplay is showing its age, and it's somewhat obvious this game is a hasty iOS port.

Where to begin? When I saw the screenshots for this game, I wasn't exactly enthusiastic about quality. Then again, I'd never heard of Mika Mobile, or Battleheart, until I was informed of its relative popularity by Artem. 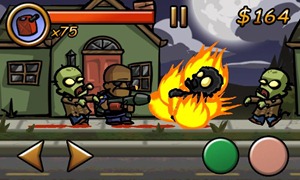 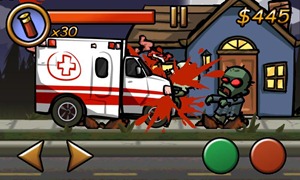 Then, I downloaded it, and I was a little happier - the graphics looked far smoother than in the screenshots (when you blow them up to full size) once I was playing it on my phone. Unfortunately, getting to that point was quite a hassle. First, I bought the app. Then I downloaded it, and headed to my app drawer. It wasn't there. I rebooted, and it still wasn't there. I uninstalled it, reinstalled, and it magically appeared. Going great so far.

Then I opened it. Then it closed (no error message of any kind). Then I opened it again, and it decided to work. I started up the tutorial - it went through the whole thing, but then just sat there with the tutorial finished, game engine still fully running (the animations were still going). Back button? Yeah, that doesn't do anything. Menu button? No dice. Home button? That sends you to the homescreen, but the game stays in memory, so when you open it back up, it's still at the frozen tutorial. Great.

So I headed into running services and force closed it. As you can see, we're off to a real good start here. I opened the app back up, and it force closed, again. I tried it again - and this time, it worked! I quickly selected a character, and started playing.

Is kind of boring. Sure, this game was genuinely popular when it was released on iOS, but for any price, this kind of elementary sidescroller gameplay is starting to feel very, very tired. And with games like Age of Zombies and Plants Vs. Zombies, the zombie niche on Android is getting quite crowded, you know. I'm joking about that last part, just so we're clear. 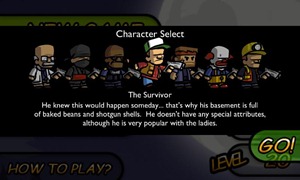 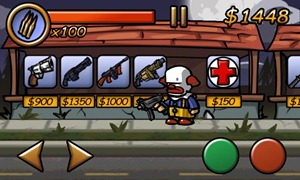 Really, the point I'd like to make is this: this isn't much of a game - it's an audio-visual time killer. You can sit back, choose your character, tap the little green and red buttons to your heart's content and watch zombie heads explode like big, overripe watermelons, and you can do it with a variety of weapons and vehicles. This is, literally, the entire game. And a lot of people seem OK with that. There are no truly original mechanics, no interesting control designs, and no real deviations from the core gameplay. There's no AI to speak of, and the graphics are at what I'd call the minimum acceptable level for a game of this genre.

The bugginess and lack of working function buttons continued to plague me even as I played. There's no way to restart a level, adjust settings (from anywhere but the main menu), or quit the app. Pressing the home button, as I said, will keep it in memory for some time.

This seems more like a result of inadequate thought (or effort) put into the porting process - every game should, at least, recognize the back button (I'm aware many iOS ports lack this functionality). Combined with consistent and seemingly random crashing, Zombieville can be a bit of a chore to play.

This is the sort of "game" you'll see someone playing while they're waiting in line at the DMV or in the terminal at an airport. It is the gaming equivalent of junk food - enough to sate your appetite for entertainment for short periods while you wait for something more interesting to happen.

[Weekend Poll] Which Is More Important To You In A Phone, Size Or 4G?