HTC has finally laid out a timetable for the release of software updates on phones that will allow the unlocking of device bootloaders. It sounds like HTC will be utilizing a system similar to Sony - which uses a web-based tool as part of the unlock process. Why? HTC states that while the OTA software update allowing unlocking will start rolling out in August, the actually ability to unlock phones won't be ready until early September. So, at the earliest, your EVO 3D or Sensation 4G will be unlockable in about 2 months.

Unfortunately, there's another caveat: HTC hasn't exactly made it 100% clear that August is the date for the release of said software update for the EVO 3D and Sensation 4G. Read this:

We’re thrilled to announce today that software updates to support bootloader unlocking will begin rolling out in August for the global HTC Sensation, followed by the HTC Sensation 4G on T-Mobile USA and the HTC EVO 3D on Sprint. [emphasis ours]

One could interpret this in two ways. First, that all 3 phones will be receiving an OTA update allowing unlocking in August. Or, that the global version of the HTC Sensation will receive the OTA in August, and that at some point the EVO 3D and Sensation 4G will receive similar updates. Which does HTC really mean? It's hard to say - on the one hand, public statements by major corporations are often carefully worded. On the other, it could just be an unintentional ambiguity. We've contacted HTC and are hoping they'll clarify.

Otherwise, take a look at HTC's full statement below, or on Facebook. 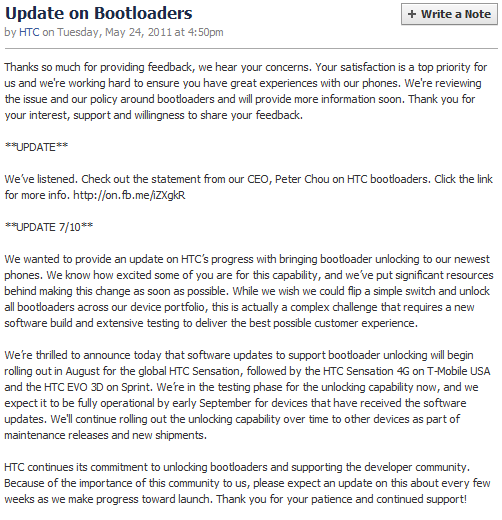 Android-Powered Tablets Take 34% Of The Global Market In Q1