The Amazon Appstore's 'Wi-Fi Only' tag on certain large apps (read: Plants Vs. Zombies) has been a frustration for those with consistent access to 4G while they're on the go. I mean, come on Amazon, if I really want to download that 75MB PopCap game, it's my data connection! I'm sure there's some reasoning for this (like reducing the active # of connections on the Appstore's servers), but when you're on 4G, it only makes sense that you should be able to do the things you would on Wi-Fi.

Over the last few days we've heard from a number of people claiming the Appstore now allows Wi-Fi Only downloads over 4G, and we tested it out, sure enough, it works: 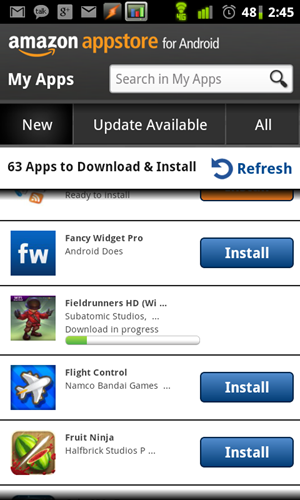 Now, we've also heard it doesn't yet work on Verizon 4G LTE - but Sprint's WiMAX is a definite go. AT&T, T-Mo, and VZW customers with 4G phones, let us know in the comments if this works for you as well.

[PSA] Sprint Promotion: Renew Your Contract And Get Credit For A Free Month Of Service