I'm not sure why anyone would want the DROID X2 (our own Aaron Gingrich didn't exactly love it, either - and that's putting it nicely.) But, some people do seem to like the X2 - probably most owners upgrading from the original X. Why? Because it looks and feels exactly the same. So, if you want this Motorola monster, now's a decent time to get it - as it's just $100 with a new Verizon account on Wirefly or AmazonWireless. 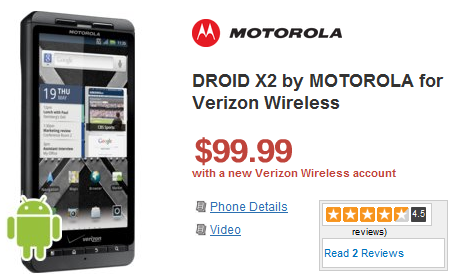 The X2 is packing an NVIDIA Tegra 2 dual-core processor, a 4.3-inch qHD display (some people hate qHD for its Pentile subpixel rendering), 512MB of RAM, and an 8MP rear shooter. But what it doesn't have is 4G, sadly. Frankly, this thing's price is probably just going to keep dropping, and we wouldn't be surprised to see it hit the $0.01 mark by early August - so if you bide your time, you might even save more cashola.