A new update for Google Maps was released today and brings some impressive new functionality. Artem put it well (although perhaps not exactly eloquently): "it's #$%^ing amazing... Google keeps blowing minds." In a nutshell, Transit Navigation (as it's officially dubbed) brings exactly what you'd expect - it helps you navigate public transport. In their words:

Transit Navigation uses GPS to determine your current location along your route and alerts you when it’s time to get off or make a transfer. This is particularly helpful if you’re in a city where you don’t speak the language and can’t read the route maps or understand the announcements. After starting your trip with Transit Navigation, you can open another application or put your phone away entirely and Google Maps will still display an alert in your notification bar and vibrate your phone when your stop is coming up. 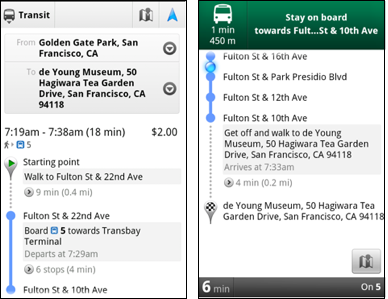 They've also included this handy-dandy video, which essentially recaps the above description... but you should probably watch it anyway:

In addition to the above, the update brings other improvements, namely updated directions, improved search suggest, and a photo viewer for Place pages.

The update is live in the Market now - head on over and install the update to try out the added functionality. I'd be interested to know how well the Transit Navigation works, especially considering it's still in beta.

Update by Artem #1: There is another new feature that Google didn't bother to mention, which seems pretty important - the ability to download and manage 10x10-mile maps for offline use. It can be enabled in Labs and managed in the Cache Settings. Just to be clear, this new offline caching doesn't seem to work in directions or navigation, so for now it's for exploratory purposes only (Google already cached navigation map tiles before this). Thanks, Asa and JLishere!

Update by Artem #2: The Buzz layer that I personally never cared for is now gone too. Thanks, Fiannan!