We know Android continues to grow at an amazing rate, with 500,000 Android devices activated per day and an activation growth rate of 4.4% per week (as an aside - if that growth rate is correct, that means the number of activations would double roughly every 16 weeks, based on the Rule of 72.) But how is that raw growth reflected in market share, given the rapidly expanding smartphone market? Turns out pretty well, according to comScore: 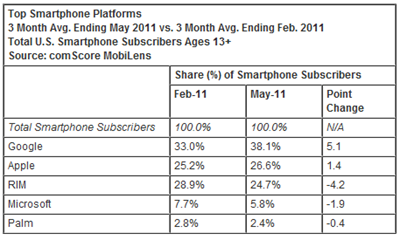 76.8 million people in the U.S. owned smartphones during the three months ending in May 2011, up 11 percent from the preceding three month period. Google Android ranked as the top operating system with 38.1 percent of U.S. smartphone subscribers, up 5.1 percentage points. Apple strengthened its #2 position with 26.6 percent of the smartphone market, up 1.4 percentage points. RIM ranked third with 24.7 percent share, followed by Microsoft (5.8 percent) and Palm (2.4 percent).