Well, isn't this interesting... it appears that Android Central has gotten a hold of a leaked screen with some pretty promising release dates for some highly anticipated phones, including the Motorola Droid Bionic. Let's push that one of to the side for just a moment though and address the first phone on the list: the Droid 3.

We've basically known everything there is to know about the D3 for a while. This image echoes the previously rumored July 14th release date, so I will be really surprised if we don't see the newest Droid incarnation hit the Big Red sales floor in a week-and-a-half. 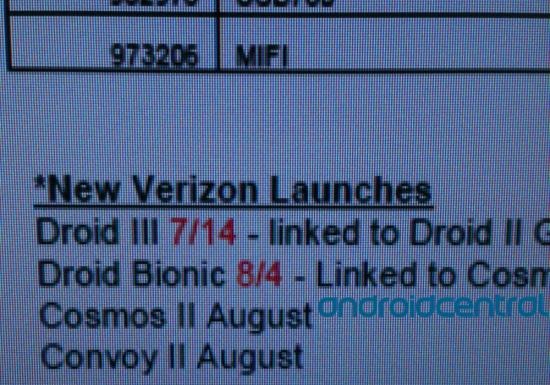 Now, the news that you've all been waiting on: the Droid Bionic release date. As you can clearly see, we should expect to see this 4.5 inch beast land on August 4th, which hits the rumored Q3 time frame right on the head.

As always, this is just a rumor and should be treated as such. We won't have anything concrete until VZW or Motorola give us an official word - but it never hurts to hope.