Wondering what CyanogenMod already brings to the table? Check out 13 Ways CyanogenMod 7 Makes My Android Phone Feel Future-Proof [Deep Review].
This article deals with a couple of advanced topics. If you’re unfamiliar with some of the terms, hit up our primers here:

First up, we have a feature that has been notably absent from the core Android experience altogether, despite the fact that iOS users have been enjoying it all along - the ability to take screenshots without downloading any additional programs or tools.

Normally, in order to take screenshots, you need to have a rooted device and install a program, such as ShootMe. Of course, in order to install CyanogenMod, you need to be rooted in the first place, so the new screenshotting feature is not as groundbreaking as it would have been had it been added to AOSP (Android Open Source Project, i.e. stock Android), but we'll take it.

The new Screenshot item shows up in the Power menu upon long-pressing the power button and sends out a special broadcast so that other applications can catch it and do something with the freshly taken screenshot (the ability to interconnect apps like that is in part what makes Android so powerful). A default application to handle this broadcast, called CMScreenshot, was also included - I think all it does is save the screenshot to disk right now.

Screenshot support was added by RC (Ricardo Cerqueira or @CM_arcee on Twitter) to the CM tree here and here, and should be available in the upcoming nightly builds starting tonight. 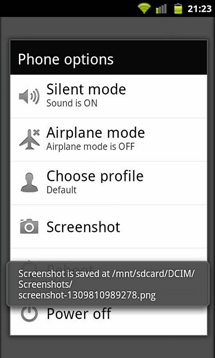 When I switched from the HTC Sense stock ROM to CyanogenMod, one of the things I noticed immediately was the lack of touch-to-focus support in camera mode.

Fortunately, the feature jumped high enough on the devs' TODO list, and starting with tonight's nightly will be available for supported cameras (which from what I can tell right now includes HTC phones only) when taking pictures (no video support yet).

Samsung device owners: support for your devices is being evaluated.

Droid Incredible 2 users, while the S-OFF solution from AlphaRevX is not available just yet (we're expecting it any day), you will be glad to know that the moment it is released, you will be able to grab yourself some CyanogenMod 7, as it is now officially supported by the CM team, thanks to the amazing attn1.

The first build of CM 7.1, dubbed Beta1, is available for download here, and we're expecting it to hit the official CM download mirror network in nightly form any day now.

Thanks to everyone involved in maintaining the great custom ROM on Earth!