Skype, one of the most popular audio/video calling applications on the desktop and now property of Microsoft, has been long criticized for lacking any video support on Android and being generally unstable and prone to crashing. In an effort to rectify the situation and raise that 3.6-star Market average, the company released a major version update minutes ago from 1.0.0.983 to 2.0.0.45.

The update finally brings video calling, albeit to only a small subset of devices:

The number of devices is very limited, and Skype's choice is nothing but strange, with popular front-facing-camera-bearing phones, such as the EVO 4G, EVO 3D, Thunderbolt, and others, completely unsupported (though the Thunderbolt got its own video-enabled leak in April). Why Xperia neo and pro are supported in their place is not clear to me - Skype, perhaps you could invest in a few more test phones people actually use? How about it?

Video calling is not the only feature present in the Skype app v2 - in fact, there are 2 other notable additions:

I welcome any major updates to popular apps, but seriously, guys, with over 200 different Android phone models out there, it's time to start releasing software compatible with more than just 2%. 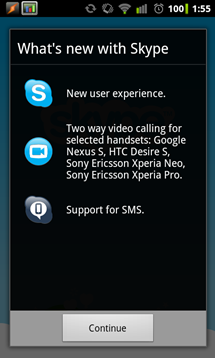 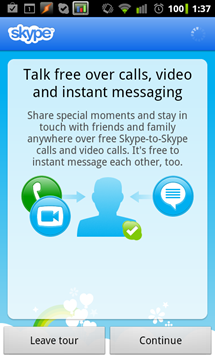 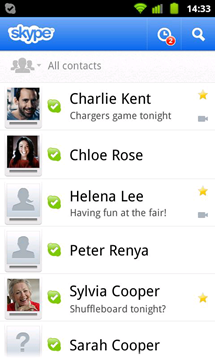 Grab the update in the Market by using the widget below.

With the new version, users will be able to make and receive free 1-to-1 video calls over Skype between their Android phone and other Skype contacts on the iPhone, Mac, Windows PCs and even TVs. Skype for Android with video works over Wi-Fi or 3G data connections and can be downloaded for free from the Android Market or Skype.com/m using any phone browser.

"We are committed to bring Skype Video Calling to as many platforms as possible and are delighted to deliver on this with our new updated Skype for Android app," said Neil Stevens, Skype's vice president and general manager for product and marketing. "With approximately 30 million concurrent users logging into Skype at any given time and making up to half a million simultaneous video calls , Skype for Android with video makes it even easier for users to share moments with their contacts wherever they are."

In addition to video calls, users can also make calls to landlines and mobiles around the world, as well as send SMS's to friends and family anywhere in the world at great Skype rates. All this comes with a complete redesign of the Skype for Android user interface. There's a new main menu on the Skype app for Android where users can navigate easily through their contacts, access their Skype profile to change personal details or see the balance of their Skype Credit. Finally a new mood message box at the top of the Skype app menu makes it easier than ever for users to share how they are feeling, what they've seen, or what they're up to.

[Book Giveaway #4] Want To Be An Android Developer? We're Giving Away "Android Wireless ...