If you play the popular Scrabble clone Words With Friends on a Honeycomb tablet, then you may have noticed something a bit odd lately: it no longer shows up in the app tray. That's because Zynga - apparently unknowingly to its support staff - dropped Honeycomb support from the game. When one of our readers tried to contact Zynga asking why WWF was no longer supported on Android 3.0+, this is the response that was received:

Thank you for contacting Zynga With Friends Customer Support!

Currently, Words With Friends and Chess With Friends are only supported on Apple iOS devices (iPhone, iPad, and iPod Touch) and Android devices. We are working to support other devices and hope to provide access to our players using these other devices in the near future.

Thank you for the inquiry!

Judging by this reaction, I think it's probably safe to say that Zynga has absolutely no clue what Android actually is. This is what I get when I pull up WWF in the Android Market: 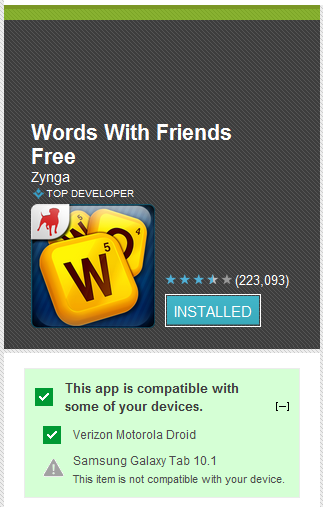 As you can see, it clearly shows as incompatible with my Tab 10.1. Naturally, this leaves us wondering: what gives, Zynga? Two days ago WWF worked fine on Honeycomb, and now you don't even acknowledge its existence?

We're keeping a close eye on this story, and we'll make sure to keep you updated as more information arises. Play Angry Birds On Your Nook Color? Head Into Barnes And Noble For A Free Unlockable Character