When the new Google Talk with voice and video calling was launched, those of you on T-Mobile who wanted to place calls on 3G quickly found out that it wasn't at all possible. Rather than connecting you to your dog for an afternoon chat, the application stubbornly insisted on only operating through a Wi-Fi connection. At Google I/O 2011, I was able to dig up some more technical details surrounding this limitation, even further upsetting hopeful customers. Bummer.

The light at the end of the tunnel appeared out of nowhere today, when reddit user ep311 was suddenly able to call a friend from his Nexus S running Android 2.3.4, all on 3G while driving home from work. After quickly polling @AndroidPolice followers on Twitter, I was able to get a few more confirmations [1] [2] on a MyTouch 4G and a Nexus S: 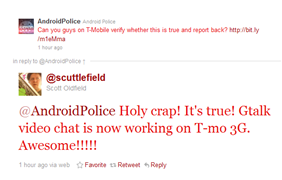 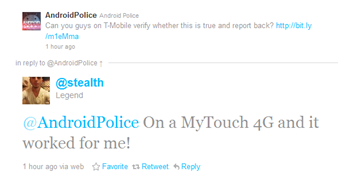 Adding a couple more confirmations from the reddit post, I'd say the theory is all but officially confirmed - let's just hope it wasn't some unintentional accident on T-Mo's part.

So, can you make a call on 3G on your T-Mobile device? Vote in this poll and post your results together with the device model in the comments below - let's see how widespread this is.

HTC Is "Diligently Working" On That EVO 3D Bootloader Unlock, In Case You Were Wondering