I'm not a big fan of the DROID Charge, but hey, to each his own. And apparently consumers haven't been such huge fans of the phone's notoriously high original MSRP ($300 on upgrade or new agreement), making it the most expensive subsidized Android phone to date. 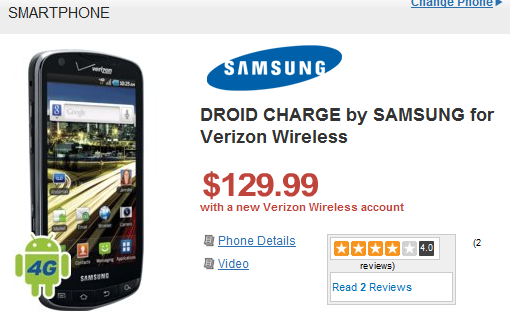 Well, Wirefly has started playing hardball, and after having dropped the Charge down to $180 a month or so back, they've gone price-slashing yet again: you can now pick up the Samsung DROID Charge for $129.99 on a new Verizon account with a 2-year agreement, or when you add a line to your existing plan (sorry, it's still $200 if you want to upgrade).

This does present a bit of a 4G dilemma, though. The HTC Thunderbolt can be had for the same price over at AmazonWireless, and the LG Revolution is a mere $99. These three phones make up Verizon's current 4G LTE handset regime, and all of them have been roundly criticized as overpriced and underpowered. At least the former criticism carries a bit less weight now.