We often hear smartphone and other market share figures bandied about by various analysts and market research firms - but comScore tends to be a pretty trusted name in the industry, particularly when it comes to web traffic figures, so we take these numbers as being fairly reliable.

In their most recent web traffic survey of "non-computer" devices (tablets, phones, media players), comScore evaluated traffic on a per-nation basis, and the results don't paint a pretty picture for Android tablets. 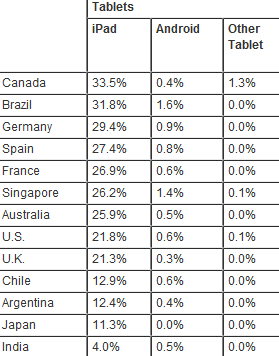 Raw percentage as part of all "Non-Computer Devices"

If you break down the raw percentages above, Apple's iPad represents over 97% of all tablet web traffic in the United States. Android, on the other hand, makes up a paltry 2.7%. There has been a lot of optimism about Android's recent "breakthroughs" into the tablet realm with the Motorola XOOM (well, we knew sales weren't great) and ASUS Transformer - but it seems that no one Android tablet has really been doing much to loosen Apple's iron grip on this emerging market.

Now, it might be argued that iOS users use the web more than Android tablet owners and that this has a minor skewing effect in terms of overrepresentation in the above figures, but honestly, that'd probably be a bad thing, too. If Android owners are browsing less often than their iPad-toting neighbors, they're probably using their tablets less often generally. And that has (negative) implications in regard to the practicality and usability of Android tablets generally.

Samsung's Galaxy Tab 10.1, I think we can all agree, stands the first good chance of any product in terms of competing with the iPad in ways consumers will really notice (design, slimness, weight). As the Tab 10.1 was released officially in the US just last week, it isn't taken into account on this survey (well, Google I/O models are). But, we'll be quite curious to see how these figures look in a few months.