Sometimes, it's best when a game doesn't perform just one function. Especially when graphics-heavy apps charge more than usual for an experience that might grow stale, variance and depth is extremely important. The iOS port of Galaxy on Fire II has depth in spades, but is the overall experience worth the game's price?

Galaxy on Fire II plays remarkably similar to a 2003 Windows game called Freelancer, in which you took on the role of an interstellar starship captain with an eye for earning money. The same concept remains true in Galaxy on Fire II; you can follow a story mission or go off on your own, accepting missions from people in space station bars. Using the money you earn from completing missions or selling goods, you can upgrade your ship and weapons with a number of modifications.

Combat is experienced in real time, letting your ship dodge laser fire while lining up that perfect missile shot to suck that pirate out into the vacuum of space. Combat is a bit hectic, but mostly optional if you avoid story missions. What I like about this game is that you there is enough content to satisfy any need for a "break" in the action by letting you mine, ship, or trade.

The THD upgrade to this title suits it very well. The graphics are downright gorgeous, and I was very impressed by the level of detail in both ships and the objects in the game world. The developers seem to want you to revel in their work since they give you a free-look camera and an "Action Freeze" mode, which is available from the pause menu.

Action Freeze lets you rotate the camera to any angle you desire, then lets you snap a screenshot to keep and share. These are stored on your SD card and are emblazoned with the Galaxy on Fire 2 and NVIDIA logos. 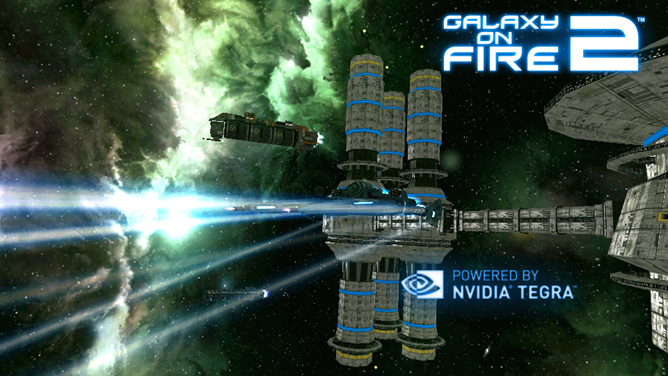 Sadly, these photos are quite difficult to find on your SD card; I was only able to find the "GOFII" folder with my phone's stock Gallery app. Trying to find the path in which these files existed through the "details" menu was met with an "unknown" result, so those using gallery replacements like QuickPic should beware. I wish there were an option to view the gallery in-game, for easier sharing, but this seems to be absent.

What impresses me most about Galaxy on Fire is the amount of depth the developers were able to squeeze into the game without having it become a confusing mess. There are numerous star systems, commodities, weapons, gadgets, ship models, and people - all working together and intertwining at the same time. The commerce, combat, mining, and manufacturing are all implemented superbly, with some exceptions (see below). They're successful in the sense that each one functions as its own addition to a great gaming environment.

This kind of depth is something I don't really see enough of; it's ambitious without failing. Ironically, it's a port of an iOS game, which marks a disturbing trend: are there any Android developers out there with the balls to make something natively? 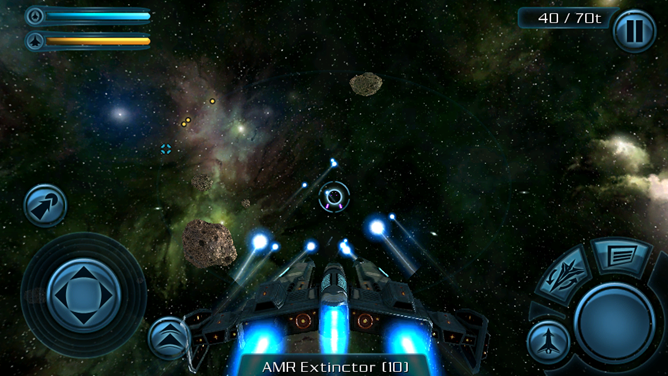 However, this game isn't without its faults. Unless you've got a weapon that uses the lock-on system, having it active is kind of useless. The controls really need to be fine-tweaked in order to find a sweet spot of "just sensitive enough," as it's much too easy to overshoot or undershoot your targets. It got to the point where I spent just as much time trying to line up my shot as actually firing: I suspect on higher difficulties this would be quite maddening.

Some UI foibles exist, too: accidentally hitting the "afterburner" button when moving your ship around with the joystick isn't hard, leading to some awkward moments where you'll speed past a space pirate instead of blowing him up. Using the controls effectively requires a degree of self-control; you need to keep a cool head during combat and make sure your fingers are where you need them to be.

The game retails for €11.99, which will come out to over $15 USD/CAD. This presents a unique problem - many Android applications and games tend to be on the cheaper side, while iOS titles tend to be more expensive. Will Android users be willing to pay for higher quality titles like this? Or will low sales discourage high-quality game developers from Android, instead taking their apps to more profitable markets?

While I would argue that Galaxy on Fire II has $15 worth of content, I would give it a pass based on the unreliability of the touch controls; if this game were $15 with a mouse and keyboard or gamepad, it would easily have my money. For a game of this depth to include a fully voice-acted campaign on a mobile platform earns it some points, but others may not be as appreciative.

The game comes with the first solar system unlocked, allowing you to try out the title before unlocking the full experience through in-app purchase. With a $15 investment on the line, however, that's to be expected.