Notch another victory for the Android community: shortly after Motorola publicly stated they would be moving towards unlockable bootloaders - even retroactively where possible - it appears that the Gingerbread update for the Atrix does just that. Brief Mobile laid hands on a leaked early build of the Android 2.3.3 update, and to their delight, found that unlocking the bootloader was as simple as using a simple console command. 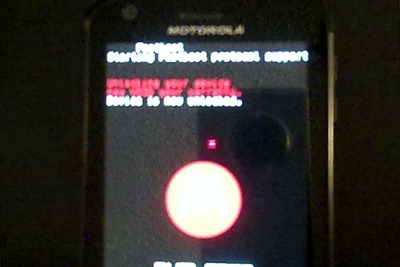 I hereby declare this the poster child for "Mr. Blurrycam" photos.

It's worth pointing out that, according to Brief Mobile, this is an early build of the update. As such, there's a possibility that Motorola simply left the bootloader unlocked for developer use, and the final update will maintain the locked bootloader. Unlikely? Definitely, but it's always better to be prepared for the worst.

Other details on the ROM are unfortunately incredibly light at the moment. No mention is given to where the ROM came from (they don't actually say the leak itself is exclusive, or whether they simply found it somewhere), nor are there any details on the update itself.

Update: video - unfortunately, it too deserves a spot in the Blurrycam hall of fame.

Hulu Plus Finally Available In The Android Market For Select Few Models, Download Away If You Can