Update: According to two separate Verizon memos intercepted by Droid-life, existing Verizon customers can keep their existing data plan pricing when renewing or upgrading. Unfortunately, as with all offers of this type, just how long it will last remains to be seen. But, given that the BIONIC is coming some time soon-ish, it seems very likely that existing Verizon customers will be able to get the device without being forced into tiered data. 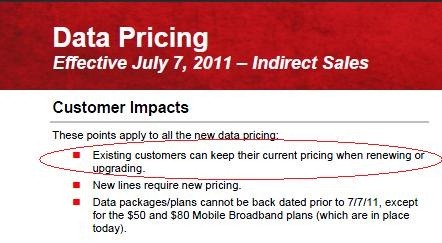 This should sate a lot of potentially angry current Verizon customers, but will definitely punish those coming over from AT&T for the iPhone 5 later this year. Good news for Android, I suppose. Still, I think the way they're doing tiers isn't great, and this mercy provision doesn't change that - it just reduces the public outrage about it.

Warning: This is a rant. It's also the first time I've really been critical of Verizon's plans to adopt data tiers. But it's not the principle of tiers that upset me - it's the way Verizon has set them up.

I've been following the story surrounding Verizon's planned adoption of tiered data plans pretty closely since we heard about it last year - and I'm not even a Verizon customer. When I awoke today to news that Droid-life had inside information in regards to the pricing of those tiers, I was a bit flabbergasted by what I found. And just minutes ago, Android Central basically confirmed the pricing information Droid-life received via an interoffice memorandum that was sent to Verizon stores by a marketing VP. These snippets essentially validate the story Droid-life published:

With the new usage based pricing plans, the vast majority of our customers will be able to enjoy their typical level of data consumption for the same value that they outlay today... the new data pricing will apply to both our 3G AND 4G LTE networks.

Translated, this guy is saying customers will pay the same data rate they already do ($30/month) as the baseline tier price, and the 2GB mark makes sense because it is generally considered well-within the average user's data habits (actually, only users in 95th percentile and up consume more than that per month - supposedly). As for the 3G/4G pricing, they'll be the same.

Valued Added? Yeah, There Isn't Any

If you read my article on data usage, you know I don't have much of a gripe with data tier-ification. In fact, I think it's a pretty good idea - and it's the way Europe and most of the world have done things since the days of EDGE GSM mobile data networks. Cell towers aren't free to operate, and clearly, having a lot of subscribers on a few access points at once not only burdens the network and drives up costs, but it also makes everyone's data speeds plummet. AT&T customers in New York City and San Francisco can attest heartily to that last part.

Tiered data forces people to think about when they use data. It also allows people who use less data than the average person to save money (are you hearing me, there, Verizon?). Let me boil down my position on tiers: Tiers should reward light data users by saving them money, but they should also allow heavy users the choice to pay more to get more.

Verizon's tiers do only one of those things (the latter). Verizon's argument is, of course: inflation, increased network burden, LTE rollout costs, blah, blah, blah. That's fine and dandy, but the fact remains that it is greed, not a concern for the consumer, that has led to the baseline data pricing. If you really wanted to reward consumers who don't burden the network, you'd offer more plans. You'd offer reasonable pay-as-you-go data rates ($10 access fee plus $10 every GB starting a 1GB, perhaps?).

But Verizon has chosen to make the starting point $30 for 2GB (supposedly).  And they also offer consumers an extra 1GB for "free" if they opt to go for the $50/5GB plan - as opposed to $60/5GB if you ended up there on overages. Verizon knows this economic incentive will cause almost every single one of those top 5% of data users to go for the 5GB plan. You'd have to be stupid not to - it's cheaper than paying as you go! At least, that'll be the pitch. "You could get 3GB for $40 a month, but for just $10 more you could be getting 5GB!"

I'm OK with charging people that rate for 5GB of data. Really, I am. I'm not OK with the tiers being set up in such a way that it puts consumers in the awkward position of risking paying more via data overages than they would by simply increasing their data cap. Verizon isn't losing any money because of your 3GB of "unexpected" data use that exceeds your plan limits. This is consumer manipulation, plain and simple.

AT&T's tier pricing isn't great (2GB for $25, $10 for every GB thereafter), but it's better than Verizon's, and at least they don't actively penalize you for not getting a higher tier of data service if you incur overages.

So, What Happened To LTE Cost-Efficiency?

I think a lot of us heard about the benefits of LTE. Better throughput. Superior load-handling. Much higher speeds. Substantially reduced network operation costs (each MB of data costs far less to the carrier than CDMA or HSPA).

Now, obviously it costs Verizon more cashola to run its LTE network alongside its full-blown nationwide CDMA service. But as more and more 4G LTE phones get sold, the less burden there will be on the CDMA network, the lower costs will be, and Verizon will be able to start dismantling redundant 3G service in major urban areas - reducing costs significantly as LTE takes over more data-handling in those regions.

Either way you cut it, LTE is going to reduce Verizon's network operation costs in the long term, and that's been most of the incentive to adopt the technology over competitive systems like HSPA+. It's what they've told investors. And it's what they've told us time and time again in press releases. But now Verizon is saying to consumers "We're going to charge you LTE users, who are saving us money [in the long-term], the same price per GB as people on our less efficient, more expensive to operate CDMA network."

This can clearly be spun the opposite way. Verizon's response would likely be that LTE users are receiving vastly superior 4G service plus Verizon's unmatched 3G coverage for the same price as non-LTE subscribers. It's a steal of a deal! You know what I want to see? How much more data LTE users are consuming per month than 3G CDMA subscribers. Really, Verizon, let's see those numbers.

And with all these consumers happily enjoying Verizon's LTE service, the rest of the smartphone-toting populous is starting to take notice. Verizon sated early adopters with unlimited data agreements, but has been sure to hold back on releasing any truly "next-gen" 4G smartphones. But we all know what's coming: the Motorola DROID BIONIC. The BIONIC will likely be Verizon's most advertised, best-selling handset of the year. And all of those new customers will likely get their LTE-enabled BIONICs subject to Verizon's new data pricing.

In fact, I'd even expect individual plan upgraders will probably be forced into the new pricing as well if they want a BIONIC - as it will likely be the most powerful and desired phone on the market when it hits. People will cave - we all know what it's like to want "the" gadget of the moment. Sure, a salesman here and there might "make a deal" to keep around a particularly good customer with multiple lines or a related business account, but somehow I doubt we'll hear many of those stories from BIONIC purchasers come July (or whenever it comes out).

Anyway, that about covers it. My rant is over - I hope you took something from it. Let me know your thoughts, as well, in the comments. I'm really interested in hearing what you all think about the rumored pricing/data caps.