Update: In a new Facebook update, HTC explained that some apps would be cut to allow enough space for the Gingerbread update. Looks like it was all about internal storage after all, rather than RAM.

That was quick. HTC, via its UK Facebook page, has announced that Gingerbread will be coming to the Desire after all. Despite the all but scientific conclusion of HTC's engineers, after rigorous testing, that "there isn’t enough memory to ... both to bring Gingerbread and keep the HTC Sense experience on the HTC Desire." So will the Desire be going Sense-less? Probably not, but that would be a very interesting move on HTC's part. It seems more likely that Sense will be going on a "diet" of sorts in order to make the situation with the limited gee-bees work out (assuming they didn't actually work in the first place). 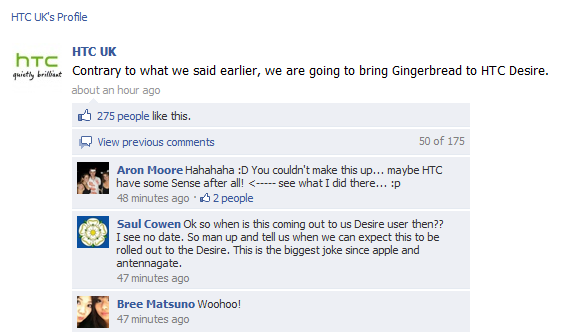 Guess we'll have to wait and see.