Update: Don't install this app until it gets an update - it will turn your GPS on every 10 seconds to update your location info, and won't stop unless you Force Stop it from the Manage Applications screen. It was at 68% on my phone's battery usage menu after 6 hours of doing little with my phone aside from checking e-mail sporadically. Yuck.

Have you ever wanted an app that aggregates your favorite daily deal and special offer services into a single, location-based list? I certainly have. Oddly enough, T-Mobile has launched just such an app, called "More for Me." We've all seen carrier-branded applications before, like Verizon's VCAST app store (and their veritable crappy cornucopia of other apps), but most of them suck. Really bad. So when I heard about T-Mobile's More for Me app this morning, I was admittedly quite skeptical. 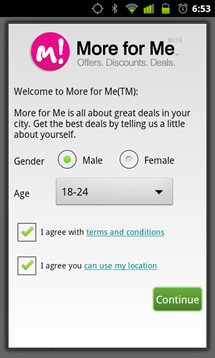 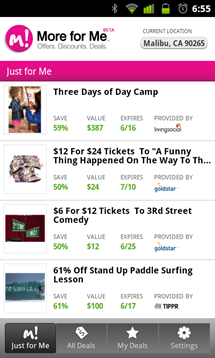 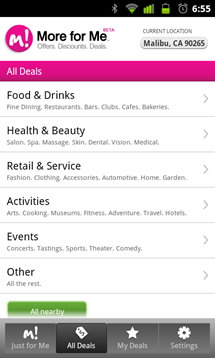 Believe it or not (well, you could just try it), it's actually decent. It runs smoothly, the GUI is quite attractive and functional, and the deal pages are all rather informative. I actually like the layout a lot better than the Groupon app.

But it's not perfect. More for Me still has a couple of major flaws - flaws that probably explain the "BETA" moniker sneakily tucked into the app's logo. The two big flaws are, well, big.

First, there's no in-app purchasing mechanism; instead, you're directed to the webpage of the deal on the originating service's site (eg, Goldstar, TIPPR, LivingSocial). Just what I want to do, enter my credit card number on a non-mobile webpage on my 3.7" screen phone. And if you try to buy a LivingSocial deal, it doesn't send you anywhere - you'll just end up at the mobile-optimized site's homepage. Yuck.

Second, the three services I named (Goldstar, TIPPR, LivingSocial) appear to be the only More for Me partners for the time being. This basically means there are no food and drink deals, and the total number of deals overall remains pretty small. If you don't count the 50 or so play and theatre deals (none of which were remotely interesting) I found in the deal list for Los Angeles, there's only a small handful of legit offers at this point. But it is a beta, so, hopefully T-Mobile will get more (and better) partners as time goes on.

We're not sure why T-Mobile decided to make this app, but we're certainly not complaining that they tried, because the end product is pretty impressive for a first attempt.

You can get More for Me on the Market now.