Now that continuous waves of attacks against Sony's servers have slowed down a bit (it's been over a week since the last hack), the company found some strength to regroup and released an Android client for its popular cloud music service Music Unlimited, powered by Qriocity.

$3.99/month for basic and $9.99/month for premium (30-day free trial available) buy you streaming of various catalogs of music from the web (à la Pandora) as well as syncing of your own library to Sony's cloud servers with subsequent playback from said cloud (à la Amazon Cloud Drive and Google Music).

Considering most of the above can be achieved without a monthly subscription, I am not sure how many of you will jump over to Music Unlimited, although if there's one thing it has going for it, it's the UI design. Gorgeous doesn't begin to describe it - it's probably one of the cleanest UIs I've ever seen on Android.

Have a look at the official description, the differences between basic and premium (link available if you're logged into Qriocity - I hope my newly created login will stay unhacked for at least a little while), followed by the screenshots below, then jump to the Market links by clicking or scanning our app widget.

Note #1: The installer currently weighs 32MB, without Apps2SD support whatsoever (it's copy protected using an antiquated technique), so it's not for the weak of heart at all.

With the Basic plan, you can access personalized channels that adapt to your music tastes and your mood and enjoy the songs in your personal library that have been previously synched from your PC. The Premium plan offers all the features of the Basic Plan, plus full access to our entire catalogue and premium streaming channels. 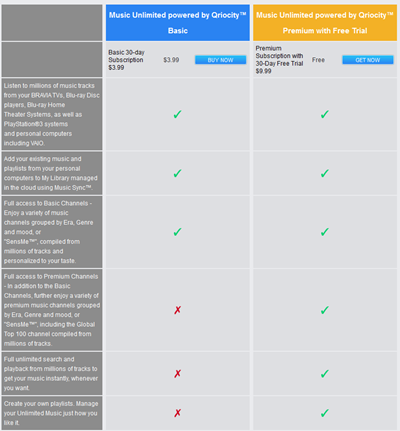 Coffee Fiends, Take Note: Official Starbucks App Is Here - It's Like My Coffee Card, Except ...