I can honestly say that this is the closest to not having an opinion I've ever come in regards to a device. Seriously, I'm EXTREMELY neutral here. More neutral than you, that's for sure. Let's see why:

Doesn't sound too bad, does it? Based on the specs alone, this phone should be awesome. Let's see how the pros and cons stack up when put next to each other:

The device itself is a solid contender. It's definitely not the balls-to-the-wall, spec-destroying, beast-mode, killer, end-all, turning-into-a-jet-and-flying-you-to-your-own-private-island device, but it's in the ranks of the HTC Inspire and the like. While the hardware and capabilities are great, the software has a high wonkitude. It feels a bit half assed at some points, not the least of which is the placement of the rear camera - it has resulted in an abundance of pictures unintentionally containing my finger.

You should buy it if you like well-built, solid, stable phones with relatively high-end specs. It also wouldn't hurt if you wanted some LTE in your life and don't mind being stuck with Froyo for an indefinite period of time. Additionally, the Revolution is an excellent phone for media junkies, as it comes pre-installed with Netflix and runs on a network perfect for streaming all the media you can handle. The sound quality is stellar, and the screen isn't too shabby, either.

Verizon's LTE network is great, but it typically only works outdoors (at least in my neck of the woods). Even as I type this, I'm sitting in a basement room next to a window... and the device still can't catch an LTE signal. When I step outside the door 6 feet away, I get 3 bars of 4G. At this point, I'm not sure whether this is a reflection of the phone itself or the network. Either way, it's annoying. Also, when I'm using 4G, I'm maxing out at around 3Mb/s. The 3G performance leaves a lot to be desired as well. 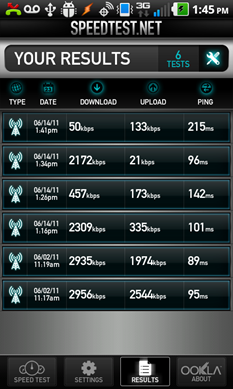 The Revolution's battery life is reminiscent of the HTC Thunderbolt's: abysmal. Even while I'm at work, unable to use my phone, the battery lasts about 7-8 hours. I have full bars of 4G service at work 100% of the time, so it can't be blamed on poor reception, and the phone is in sleep mode in my pocket the whole time. At home, I don't get 4G, so it's connected to 3G the entire time, which, inexplicably, does not help the battery life at all.

When being used heavily, the Revolution drinks battery charge like the unpopular uncle at the family reunion. I am, however, fairly used to that kind of battery performance, so it wouldn't be a deal-breaker for me. If you've got a car charger, you should be able to keep your phone alive at least 90% of the time.

Overall, the software isn't THAT bad. Sure, it looks a lot like TouchWiz and has some similar features (and drawbacks), but LG's version performs much better in my opinion. Generally speaking, there isn't any lag to be found. That said, there are some things about the skin that make me want to rip out my hair and shove it into LG's mouth. The lockscreen, for instance, is the bane of my existence because it's so intermittently functional. A lot of the time, it will work flawlessly. Other times, it just won't slide at all. More often, though, I'll swipe my finger, slider in tow, from the bottom to the top edge of the screen completely, at which point the slider will drop back down to the locked position. There have been times that I was forced to do that dance 3 or 4 times before I finally gained access to the phone, which resulted in an ultimate "FFFFFFFUUUUUUUUUUUU" moment. WidgetLocker solved the problem, but on an un-rooted device, it isn't exactly seamless. 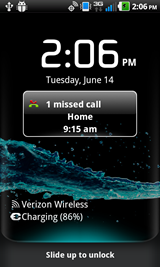 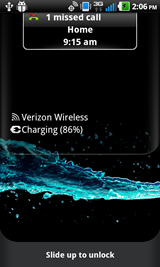 Other than the lockscreen though, I can't complain too much. Well, actually, two more gripes.

Gripe number one: Scrolling on this phone is just plain weird. It doesn't follow the scrolling model seen on most other Android devices. You'll have to watch the video to get the full idea, but suffice to say that it's not at all what I'm used to. If you do a really fast swipe, it scrolls really fast then abruptly stops after a short distance. That's not too bad, though it is a bit annoying. The other end of the spectrum is far worse: If you scroll slowly, sometimes (not all the time), the list you're scrolling through will keep moving so slowly that you can't really tell it's moving, but because of its movement, you can't make any sort of selection. Trying to tap something only affects the speed of scroll, which if you tap accurately, provides just enough of a swipe to perpetuate the god-awful creeping of menu items in the same or a different direction, starting the cycle over again. Over and over, laughing at you, haunting you; there is no retreat, even in sleep. It haunts your dreams. You wake up screaming, "Just let me open Talking Tomcat, for God's sake! It already took me 25 minutes to unlock the damn phone! AHHHHH!"

Gripe number two: The apps drawer adheres to arrangement by category. This is annoying because I like alphabetical order. It's much easier to for me to scroll through a longer list with a 100% predictable sorting method than to look through a list of lists to find what I want to do. Luckily, you can also sort alphabetically, which you'd think would be better. Unfortunately, they've added a header for each letter, and the list is a single column, wasting a hell of a lot of screen real estate. The list is about 4 times longer than it needs to be as a result of this, and it significantly slows down my usage of the phone. 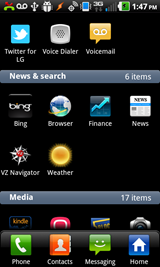 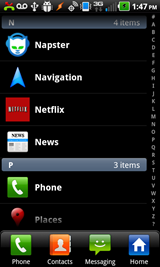 Web browsing on the Revolution is exactly what you'd expect. It has the standard Android browser and does the job as any other Android phone would.

In the realm of phone calls, which I rarely make, it performed very well. It was very easy to hear the other party, and there were no complaints on either end. Thanks to Verizon's ridiculously huge network, it never dropped a call. The dialer itself has quick dialing, which predicts names based on the numbers you type corresponding to the letters of the contact's name - super handy. As a phone, I'd give the Revolution a 10/10.

As I said, this is arguably the best-feeling device I've ever had the pleasure of holding. It weighs quite a bit, which is to be expected of a phone this size, and honestly, with a 4.3-inch screen, if it were any lighter, it would feel cheap. It is extremely solid, and nothing wiggles around. The buttons have excellent travel, and the microUSB door fits snugly and securely. The feel of the screen is just fantastic, remaining smooth and - dare I say it - luxurious no matter what situation you're in. The only problem I have with the hardware is the placement of the camera. It's significantly closer to the center of the device than I'm used to, which forced me to change how I hold the phone whilst taking pictures. This was nothing more than a mere annoyance that I got over pretty quickly, but I felt it was worth mentioning because, hey, I can do that. 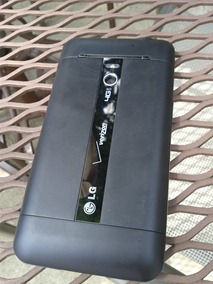 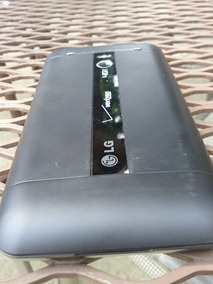 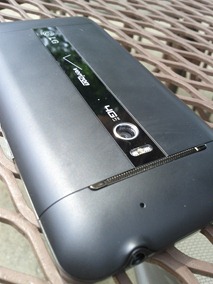 This is one of the few phones I would ever consider carrying without a case on it - it feels amazing. The only thing that would worry me is that little shiny strip on the back, but even then, screw it - this phone is a tank.

The camera takes pretty decent photos. It's not mind-blowing by any means, but it certainly gets the job done. The photos are crisp and clear, so long as there isn't much motion involved. It also does low light pretty well. I enjoy the fact that it has a myriad of options, not the least of which are face-detection and panorama mode. Examples below. 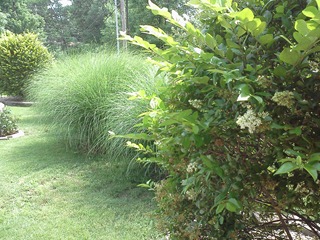 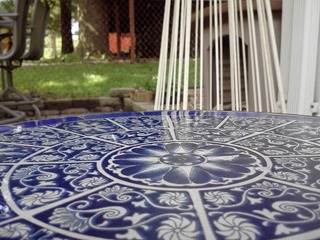 There's really no good way to make these pictures not awkward, seeing as they all contain me. I apologize in advance. 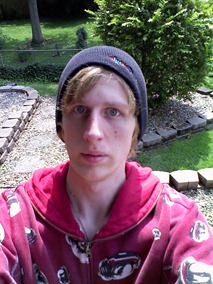 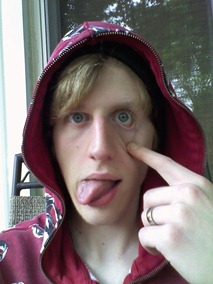 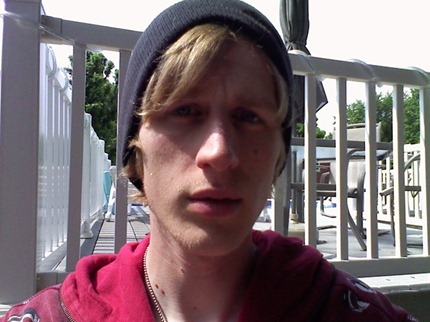 To summarize, this phone's positive aspects aren't overshadowed by its problems, but they don't overcome the dark side, either. The software is really the biggest hurdle to jump here, but having 4G is really great (when you can get it), and the camera is of good quality. The size is basically the same as an EVO, and it feels amazing in your hand. Overall, my experience with the handset was a mostly positive (if somewhat forgettable) one, but I wish LG would fix that friggin' lockscreen.