When distilled down to its base values, Doodle God is a large logic puzzle based on matching. You're given four elements (earth, air, water, fire) at the start of the game and can combine them to make things. Combining fire and air gets you steam, fire with water alcohol (firewater, har har), and many others.

From there, you can use the products of your matching to make other things, which is where the game gets most of its depth. There are over 200 different elements to find, and more being added all the time. This is the major selling point of the game, touting the ability to make fantastical creatures, like the front end of an airplane and the back end of a horse.

Along with every match, you'll get a relevant (and witty) quote from history about it. This mechanic feels ripped straight out of the Civilization series of games, in that it's added "educational" value for getting stuff done. Matches are also narrated by a British voiceover, who will say things like "logical match!" to congratulate you. However, these get grating really fast, as there's only a set amount of dialogue.

The game's matching sequences are actually quite well done, as transitioning between element groups are well-animated and smooth. To be completely honest, I shouldn't have to praise a company for coding the main function of their game well. 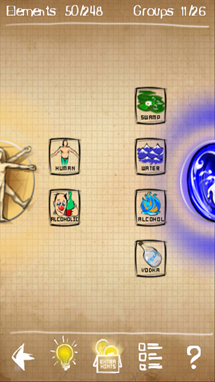 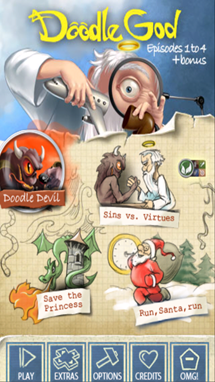 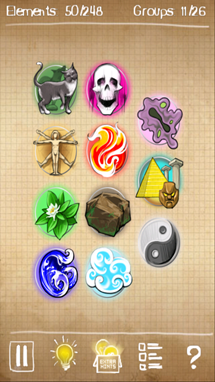 However, there's just some things about Doodle God that don't sit right with me. The touch areas for the menu options are actually a centimeter above where each "button" appears, leaving you to tap furiously until it actually works. Combinations you've already matched remain viable on the board, so you can end up creating an already-found element, wasting time. You can often find matches early on (like phoenixes) that have little relevance until later that just sit there, taking up room.

It just doesn't feel like there's a lot of polish in this game; sure, the animations are smooth and the voice acting is decent, but everything else (the menu screens and ads to BUY THE FULL GAME NOW) just seems tacked on at the last minute. It feels like they had a team that actually put effort into the gameplay, but ran out of budget to finish the rest of it.

Another problem lies in the scope and pacing of the game. Sure, I've got a goal of 200 elements to find and the tools to make it happen, but what happens when I hit a brick wall? 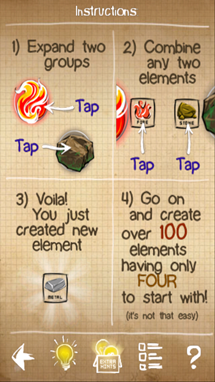 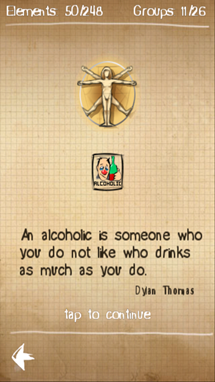 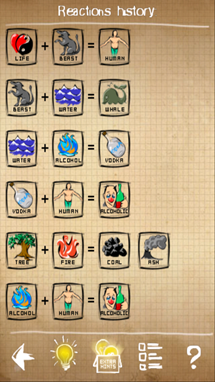 After finding about 50-60 base elements, the decisions stop being as logical and more about luck; you have the tendency to run into "dead ends," where the creation of dragons or other mystical creatures do nothing to help you match further elements. After spending what seems like ages to find a good match, running into a dead end makes you realize "Huh, that didn't help me at all!"

This just spurred me into a lull where I had no motivation to actually finish the game. When my strategy of matching became about matching every single element to every other one in a vain attempt that something would click, I just stopped caring.

The addition of quests like "Run, Santa, Run!" and "Save The Princess" just don't serve to fix the problem, either: why would I want to save Santa if I've got the elements at my fingertips? Some of these episodes really just feel like a "Christmas" theme thrown on to a launcher replacement: added to give the illusion of depth (*cough* Angry Birds Seasons *cough*).

It's very hard to form a recommendation to this game because it precariously straddles the line between "worth it" and "not." Its lack of polish in certain areas and potential to be insanely boring earn it negative scores from me, but it has potential as a game that is played in spurts.

Having Doodle God on your phone during a long car ride, a short trip on the subway or as a way to kill brief downtime is where the game gets its value. However, at £1.95 (around three bucks CAD/USD), it's a bit pricy for my liking. Thankfully, there's a free version that lets you match a certain amount of elements before it locks you out; hopefully you'll be able to make your choice from that small taste. 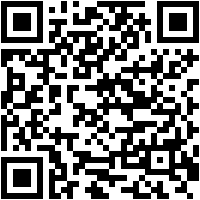 [Rumor] Motorola Droid/Milestone 3 Will Not Be Released In The UK, But The Motorola Pro Will?