It's been quite some time since we first heard rumblings of the PlayStation phone. The concept - a high-end Android phone mashed together with familiar PlayStation controls - seemed like one that could revolutionize gaming on Android. In theory, this device could have done just that.

Unfortunately, in a world where dual core devices are becoming more and more the norm, the Xperia Play's single-core Snapdragon processor (as fast as it is) is already incompatible with some high-end games, such as those optimized for Tegra 2 devices. And it's hard to justify purchasing the phone when the rest of the device has taken a backseat to the all-important gamepad.

The Xperia Play may not be equipped with some fancy new dual-core processor or 4G radio, but its specifications are still up to muster:

In A Sentence: The Xperia Play is great at what it does, but poor build quality and the single-core processor will probably prompt you to upgrade it sooner than you would expect.

You should buy it if: You love gaming on your Android device and have an affinity for stock Android without hacking. 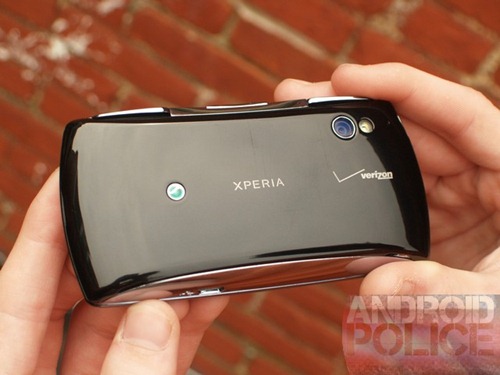 Who says a phone has to be thin to be great? While Samsung is touting the thinness of their Infuse 4G and Galaxy S II phones, Sony Ericsson has gone in pretty much the opposite direction with the Xperia Play, for the obvious reason of the built-in gamepad. Seriously, this phone is pretty huge, even thicker than some QWERTY sliders. Fortunately, Sony Ericsson engineers have done their best to make the Play as comfortable in your hand as possible, although their design decisions have had some unintended side effects.

Looking at the back of the device, you can see that it tapers to make it feel slightly less thick, with the whole surface is covered in black and chrome plastic to keep the weight down. While these do succeed in making the Play feel like less of a brick, they come at the cost of making it feel almost like a toy. And although it won't bother you much during actual use, be prepared to see fingerprints covering the back of the phone by the time you take it out of the box. The back cover is also fairly frustrating to remove and feels like it is about the snap in half every time you remove it. 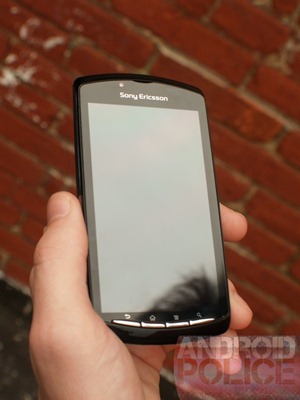 Along the front of the device, you'll find the front-facing camera and the dreaded light sensor on top (more on why it's dreaded later), with the 4.0" display underneath, and finally four physical buttons in an arbitrary order that was new to me: Back, Home, Menu, Search. Physical buttons are becoming somewhat of a rarity these days, so I'm glad to see at least one manufacturer sticking by them.

On the right you'll find the normal microUSB port and headphone jack, with the power button and notification light combination on the top. It's a bit of an awkward place for both, actually - like I said, the back is curved, making the power button difficult to press and the notification light nearly impossible to see while the phone is lying screen-up, but at least it's a step above having phones that don't ship with notification lights at all. On the right side, the volume controller is awkwardly placed in the middle, due to the trigger buttons (L and R) surrounding it.

In short, the Xperia Play feels cheap - and almost flimsy. It will almost certainly fail to last through a full two-year contract, especially if you plan to use it for heavy gaming. 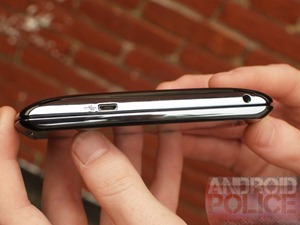 And now, for the moment you've all been waiting for: the gamepad. After all, this is the main selling point of the phone, but does it really live up to the hype? I can safely say that the build quality of the gamepad far surpasses every other part of the phone. The sliding mechanism feels great, and keys themselves are incredibly sturdy. It's obvious that Sony Ericsson put much more effort into this than... well, the rest of the device. 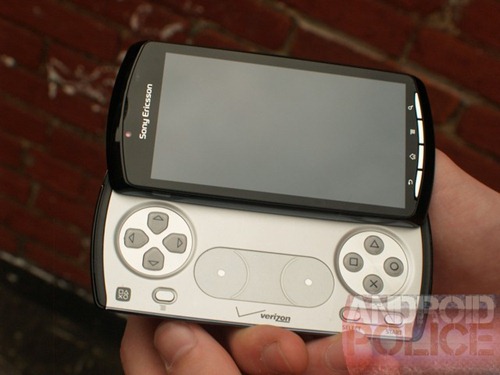 For those of you who have never come into contact with a PlayStation product, I'll give you the basic rundown: the directional pad (up, right, left, and down) is on the far left of the gamepad, with the triangle, cross, circle, and square buttons on the far right, and the start and select buttons underneath them. In the middle are the analog "sticks" - in the case of the Xperia Play, they are two touch-sensitive circles with small metal indents in the center, so that you can always feel where they are without looking away from the screen. They work surprisingly well, though they take more getting used to than any other part of the gamepad.

A second Menu button is on the bottom left, which is a convenient way to get through game menus when the gamepad is open. On top of the device (when held in landscape position) are the L and R trigger buttons, which do not feel nearly as well-built as the rest of the PlayStation controls. They don't move very far when pressed, so it can be hard to tell if you've pressed them or not. This usually wouldn't be too big of an issue, but because your fingers will naturally rest on them during gameplay it can cause some problems. 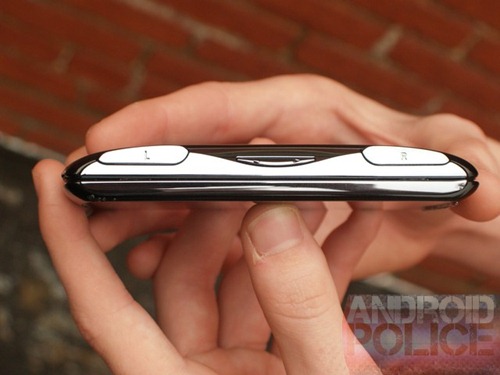 Earlier, I praised the quality and volume of the stereo speakers for adding to the overall gameplay experience; unfortunately, anything that they manage to improve is nullified by the mediocre screen. Or, more precisely, the mediocre software controlling its brightness. Oddly enough, the Xperia Play does not give users the ability to disable automatic screen brightness - instead, it is enabled constantly. You can change the brightness manually, but the light sensor still has a say in exactly how bright your screen is. And, unfortunately, it's not exactly generous. 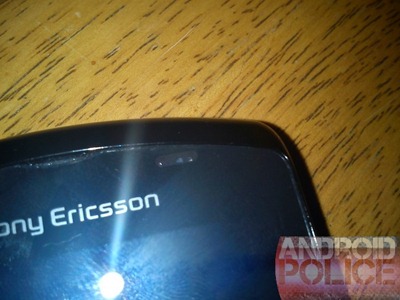 In a room with normal lighting, the Play will almost always be relatively dull. Not unusably, but it does detract from the overall experience of playing games. The only times you will see the screen go to its actual full brightness - which is on par with any other phone - is in direct sunlight or when you are purposely shining a light into the light sensor (which I admittedly did more than once). I can only imagine that Sony Ericsson implemented this to conserve battery life, which tends to drop pretty quickly when you're playing games on full brightness. Still, it'd be nice to give users a choice, and I hope that the option to disable auto brightness will be added in a future update.

As for battery life, you'll easily be able to get through a normal day with regular usage, but of course that will be greatly diminished if you are constantly playing games. The above screen issue, while annoying, does provide the battery boost that I assume Sony Ericsson desperately needed, though it's still not a very good excuse for removing the option altogether.

There's really not much to say here. You've got the standard 5 megapixel shooter with an LED Flash on the back and a VGA camera on the front. Like most smartphones nowadays, the Play acts as a capable camera for common situations, but doesn't really push any boundaries. You can judge the camera quality for yourself by checking out my hands-on and initial review. 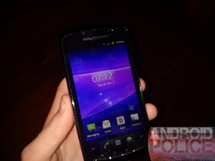 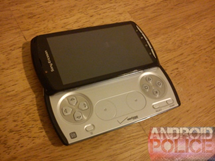 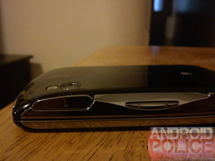 Usually, this is the part in the review where we like to grumble and complain about the various flaws and inconsistencies in manufacturers' custom UIs (read: here, here, here, and here), but the Xperia Play is a special case: like T-Mobile's G-series devices, it runs vanilla Android, with the added bonus of already being on Gingerbread (Android 2.3.2, to be specific). This makes it the first phone to be running vanilla Android 2.3 other than Google's own Nexus devices, which is quite an interesting move on Sony Ericsson's part - in fact, the international versions of the Play run their custom TimeScape UI, so it's indeed a blessing that U.S. customers received this as a pure Android device.

So, does stock Android really solve all the issues that have been blamed on bad manufacturer UIs? For the most part, yes - while I did experience a few lock-ups and slowdowns as described above, I attribute those to running several apps in the background, and not the system itself. Generally speaking, scrolling everywhere - whether it be through homescreens or your app drawer - is incredibly smooth. Not to mention the fact that Gingerbread simply looks much cleaner than anything manufacturers are pumping out these days.

Bloatware is also thankfully kept to a minimum, although Verizon has added a few of their own mostly-useless apps:

Nothing particularly interesting here: the only decent app among these is Skype, and you'll probably never use the rest of them. Most notably, for those who do want to try out the VCast App Store - don't. Even the most simple functions are unbearably laggy and frustrating. Scrolling is somehow less smooth than literally any other app I've ever used. Fortunately, there are plenty of Xperia Play-optimized games available in the Android Market with more on the way, so you shouldn't have any reason to open this app, ever.

So, how is the gaming phone on actual games? For starters, a few games are already pre-loaded:

More games - mostly those made exclusively for the Play - are also available from the above mentioned VCast Apps Store, though you'll probably prefer looking on the Android Market. I also noticed that a few games I've bought in the past (such as Armageddon Squadron) have been updated with special support for the Xperia Play.

Right now, you won't find tons of Play-optimized games, but if you watched any E3 coverage you know that many more are on the way. In the meantime, however, you'll probably want to turn to a more legally-questionable way to access games: emulators. Of course, Sony doesn't want you to go that route, but anybody who owns an Xperia Play and doesn't use emulators is wasting the full potential of the device. I had a lot of fun with all sorts of emulators - not just PSX ones - and once you map the controls, they all seem tailor-made for the Play.

Make no doubt about it: while the Xperia Play is by no means a perfect device, it most certainly does not disappoint when it comes to gaming.

Using the Xperia Play has been quite a mixed bag before me. While it accomplishes its game-playing goal quite well, and the stock Android UI makes for a very smooth user experience, this is still a very hefty phone, and that is likely to put a lot of potential customers off.

It's hard to tell the target demographic here - hardcore mobile gamers will probably be more content just buying a PSP or waiting for the new PlayStation Vita, while everybody else will be tempted by thinner and lighter options in Verizon's line-up.

Ultimately, I would recommend this device to anyone who loves retro gaming, because emulators are really where this phone shines. As for games tailor-made for the Xperia Play, I don't see them as much of a reason to purchase this device, and the high quality of the gamepad just barely makes up for the heft and poor build quality overall.