Some would say this doesn't matter that much, but I can empathize - I'm kind of an info-nut myself, I like to know what's going on with my device, and if I had an external battery, I'd want to know the remaining power figures. Well, Transformer owners, there's finally a solution to this conundrum. Two solutions, actually.

Battery And Dock Widget by beeone42

First, we have an app by XDA member beeone42 - it's a simple visualization widget that shows the status of both the tablet and dock batteries on your Transformer, as you can see in this itty-bitty screenshot:

There's not much more to say - you can get the apk for this app here. (Note: reboot your Transformer if the widget doesn't appear in your widgets list) Be sure to check the thread to see if there's an updated version, though.

The second widget is for people that like their UIs to be a bit more text oriented, as you can see in this screen: 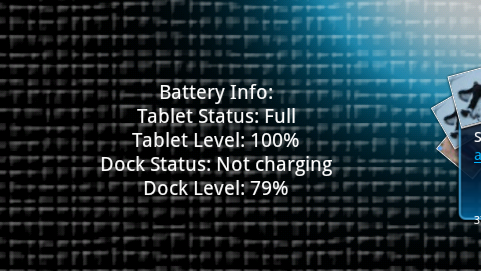 Both of these apps have been tested on rooted and un-rooted Transformers running the 3.1 update, so if you're still on 3.0.1, they may not work properly.

Did LG Delay Gingerbread On The Scandinavian Optimus 2x To Fall 2011?