It's no secret that the HTC Sensation is coming to T-Mobile on June 15th for $199 after a $50 mail-in-rebate. The device is also going to be landing at select Wal-Mart stores as early as June 12, but until now, we had no idea what the pricing was going to look like. The crew over at Android Community has gotten a hold of some info that tells us just that, and it looks like it's going to come in at $148.88 (with a two-year agreement). This means that, at the time of purchase, you'll be spending $100 less than if you wait to pick this device up from Team Magenta. 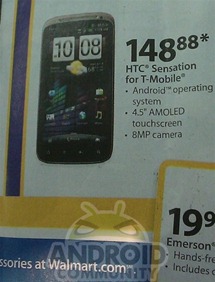 On a similar note, TmoNews is reporting that some users were actually able to pick up a Sensation 4G from Wal-Mart today, and digging through this thread on XDA yielded similar findings. At this point, it seems to be quite sporadic which Wal-Marts are letting go of this handset early and which aren't, so the only way to find out is to give it a go and see what happens. 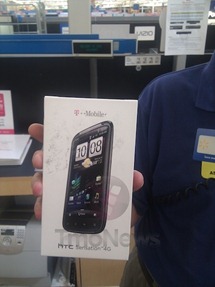 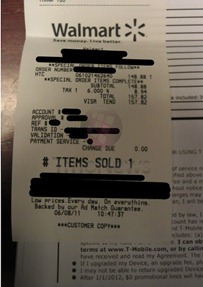 If you decide that you just can't wait to get HTC's newest offering in your hands, let us know how it goes in the comments.