I'm not afraid to say I play Dungeons & Dragons; I think it's a great way for people to have fun together and enjoy a truly dynamic narrative. However, since I write about tech and other nerdy stuff for a living, I like having the old-school pen and paper mesh with technology whenever possible.

However, like tech, Dungeons & Dragons isn't for those who don't have much in the way of disposable income; you've got numerous things to buy before you can get started, including handbooks and manuals that can run you up to $35+ each. Like the books, multi-sided dice are an integral part of the game, and a set of 10 standard dice will run you ~$7.99.

For those looking to replace their dice, a fairly impressive app has been discovered on the Market that will replace all your dice for less than the cost of a set. It's called DiceShaker D&D, and offers all the dice you'll ever need.

Now, dice rollers aren't uncommon on the market - you can even find a couple D&D-centric ones for free. What separates DiceShaker from the pack, however, is that it fully renders 3D dice to be thrown on a table and uses the phone's accelerometer to simulate just that. You can actually pick up your phone and shake it, and the dice will react as if they've been thrown.

Enabling real gravity on the settings takes it a step further, letting you tilt your phone and see all the dice move as if they were on a down slope. Holding your phone level and flicking it towards you also lets your dice get some air, as well. 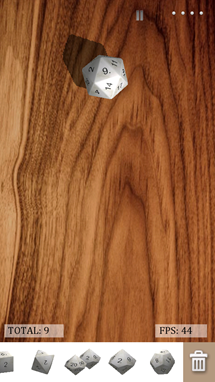 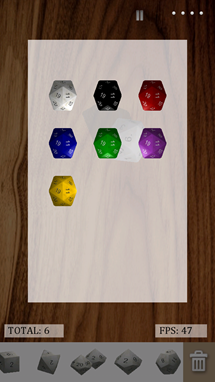 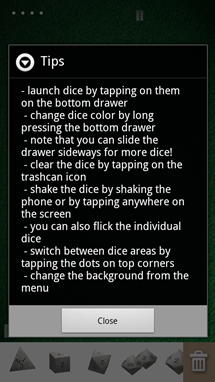 Flinging your dice gives you a very satisfying sound as they bounce around, which is just another layer of polish to a beautiful app. The fact that numbers are printed on the sides of the rendered dice can eliminate questions of whether the dice rolls are truly random, as they react as any normal set would.

DiceShaker also, for variety's sake, includes three different table tops and seven colors of dice. The dice can be mixed and matched as well, truly allowing for a personalized experience. In order to aid in speedyness during gaming, the developers have also given five "tables" which can be flicked through like home screens: each save the dice that are placed on them, so you can call upon roll combinations you use often. Instead of having to manually add two d6 every time you want to use them, you can save the table for constant use.

The app also allows for the FPS to be drawn on the screen, letting it be used as a rudimentary benchmarking tool. Adding too many dice will slow the framerate down, but I've had little trouble with as many as six different dice floating around. However, I'm on a Tegra 2, so results may vary. 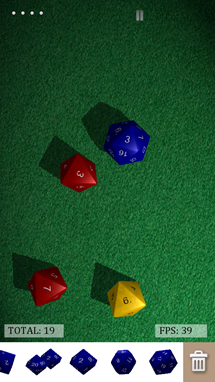 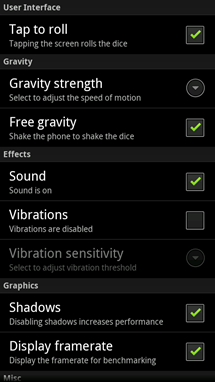 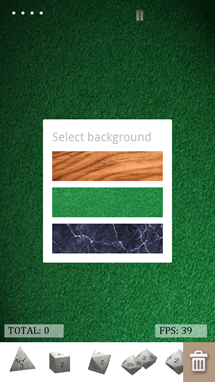 DiceShaker D&D is a €2.99 (about $4.20 CDN) download on the marketplace; a free version exists, but it only includes the ability to roll "normal" six-sided dice. If you play tabletop games and want one less thing to carry around with you, this might be the app to check out. 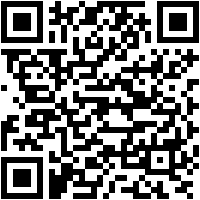 Wal-Mart To Sell The HTC Sensation 4G For $148.88, And Some Users Were Able To Get One Today